If the old saying bigger is always better is actually true, then it looks like HTC could be onto a winner with one of their latest pieces of hardware. We’ve been expecting HTC to announce something big (literally) for a while now and have even caught the odd glimpse of some prototype images that have been doing the rounds on the web for the last few weeks. As we brace ourselves for public release of the iPhone 5 at the end of this week, we can also get our hopes up about a great new HTC smartphone, possibly carrying the One X 5 moniker.

A user from the Chinese micro-blogging site Sina Weibo has turned our attention to what could possibly be an official image of the finished device, possibly from HTC’s own press pack of the rather large 5-inch unit. The One X 5 name gives the device a little more personality, considering it has been previously known by its rather mundane model number, and as the new name suggests, it will fall into the large display category with a whopping and vivid 5-inch screen that is reminiscent of the Samsung Galaxy Note.

Full technical specifications of the new HTC monster aren’t yet know, but it’s likely that it could be powered by a quad-core processor that will certainly give users an insane amount of bang for their buck. It is also being rumored that the main talking point of the device, the display, could be a full 1080p inclusion which would make it the perfect device for visual media playback. The leaked image shows users that they can expect a device that is pretty much all about the display as well as the inclusion of the high-quality Beats Audio technology which we are so used to seeing in high-end HTC devices. 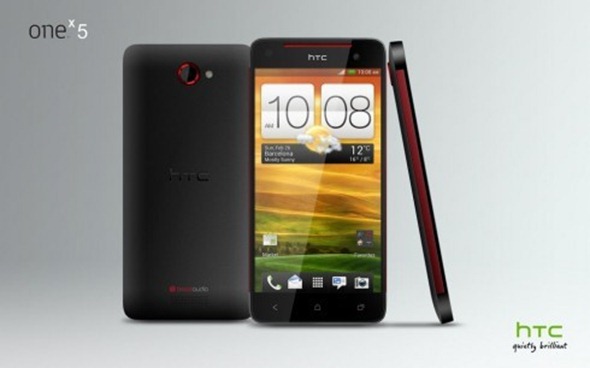 With the iPhone 5 due for launch on Friday of this week and the Lumia 920 on the immediate horizon, HTC will need to get their acts together quickly if they are going to take some of the market share away from Apple and Nokia. Thankfully, it looks like they fully understand that as they already have a media event planned for this coming Wednesday. Fingers crossed that we see the One X 5 monster during that event.