There’s no better stress reduction tool than taking control of something that you can fling at other objects in order to bring about total annihilation and creating utter chaos as you do it. Luckily for the designers and developers over at Rovio, they understood our need to break stuff and brought the fantastic Angry Birds title to our mobile and desktop devices which in turn catapulted them to the top of the iOS, OS X and Android charts. So what do you do after gaining so much success with a bunch of rage-filled birds? You take the next logical step, turn the tables around and release Bad Piggies.

It was only a matter of weeks ago when we were introduced to the first official teaser from Rovio about their new Bad Piggies game, but other than confirming that something was in the works and that it was more than likely going to be focused on those rotund little greedy pigs, we didn’t really have a great deal of information about what to expect. The full game is actually rumored to be landing on our digital shelves within the next ten days, with iOS, Android and OS X likely to be immediately supported, but the company behind the game is still reluctant to show off any official gameplay. 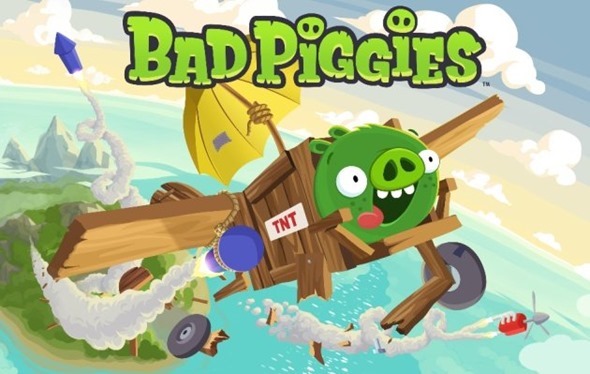 Thankfully we live in a resourceful age and the internet has won yet again thanks to a hands-on video release from Yahoo! Games who have taken the opportunity to introduce us to certain aspects of the Bad Piggies title. Players of the game will certainly not be disappointed by the gorgeous graphics and the physics we’ve come to love over time, with the visuals carrying on exactly where Angry Birds left off. Gamers are expected to use various findings to engineer rickety vehicles in order to navigate the Bad Piggies around each level in pursuit of those all-important three stars.

Although the two games are extremely similar in terms of visuals and the actual feeling, Rovio’s vice president of games seem to think that the Angry Birds and Bad Piggies games are totally opposite ends of the spectrum. The whole purpose of the original game was to take down structures, whereas the little green piggies are charged with the task of building vehicles to get around. With only ten days to wait until this release, I am pretty sure Rovio has another number one title on their hands.