As pre-orderers of the Xbox One and PlayStation 4 get sweaty palms as the two machines’ launch days draw ever closer, it’s safe to saw that we’re all very keen to get our hands on the new hotness from both Sony and Microsoft.

Speaking of getting hands on things, a new YouTube video has appeared in which one gamer compares the DualShock 3 controller for the PlayStation 3 with the newer, rather different controller that will ship as part of the PS4 bundle that goes on sale in a few weeks, that is the DualShock 4. 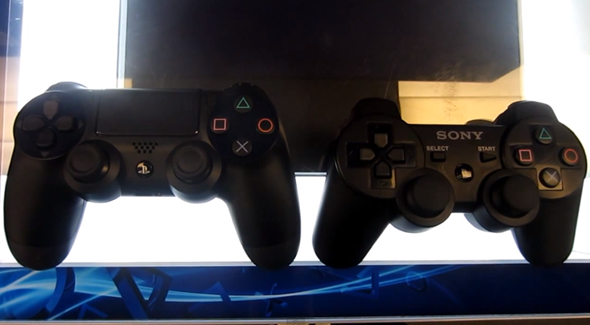 Covering a few seconds short of a full five minutes, the video shows some of they key similarities and differences between the incoming and outgoing controllers, and whether you’re a fan of the DualShock 3 or not, it has to be said that the fourth generation controller looks the business, if a little on the large side, which really isn’t a bad thing if you’re asking us.

Having watched the video, we have to say that we’re keen on the new design, and while the constant zooming in and out of the video did leave us reaching for the motion sickness tablets, it does do a good job of highlighting where Sony has changed its controller for this year’s PS4 release.

Of course, arguably our favorite addition to the PS4 controller isn’t actually an addition to the physical part at all. If you’ve ever picked a PS3 controller up only to find that it has no power in it because you didn’t want to leave the console on just to charge it then you’ll be pleased to hear that the PS4’s controller can now be charged while the machine is in standby. It’s something that seems rather obvious at this point, and it’s certainly a welcome addition, and we love it full on.

Sony’s PS4 goes on sale on November 15th in the US and will reach European gamers two weeks later. Not long now folks!

To wrap things up, and we’ve asked this question before on a number of occasions; which console are you planning to buy? You know where to share your thoughts.