You Can Now Use Siri As A Full-Fledged Pokédex, An Epic Win For Pokémon Fans

It’s been a big week for Pokémon fans, what with a new game being released for Nintendo’s 3DS that sees the franchise’s army of fans once again plunged into the world that they love so. As it goes, Pokémon fans tend to be of the more technological persuasion, which means they’ll love this news.

The online information engine (or database, as we like to call it), Wolfram Alpha, has added a mammoth 649 Pokémon to its database which means that searching for any of the game’s Pokémon will result in the engine throwing up all kinds of interesting information, including a nice full-color image of the Pokémon in question. If you’re elbow-deep in your Japanese RPG fun this weekend, then Wolfram Alpha has you covered from head to toe.

But wait, there’s more where that came from!

The awesome news just keeps on getting better here folks, because if you have an iPhone or iPad with Siri built in, then you can kick off a Wolfram Alpha search using the power of your voice. So, in essence, you’ve now got a Pokedex of your very own, just like the cartoons. See, we told you it was awesome.

Making the whole thing work is as simple as firing up Siri on your iPhone, iPad or iPod touch, saying the magic words "Search Wolfram for [name of the Pokémon you’re looking for]” and sitting back and waiting for the planets to align just so. Assuming Siri’s on his – or her – game, then you’ll end up with a lovely set of results telling you more than you could ever hope to know about a Pokémon. Pretty impressive stuff if you’re asking us. 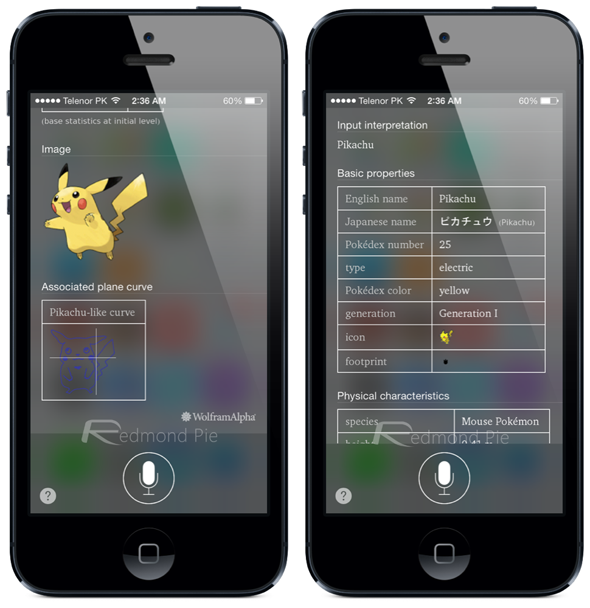 Wolfram Alpha is arguably something of an unsung hero of the Internet, and if you use Siri then it’s certainly something that you should get to know well. Being able to ask your phone all manner of things and have Wolfram Alpha kick the result out never grows old.

That’s all assuming Siri works, that is.

Now that we have Pokémon over at Wolfram Alpha, it would be great if Apple refines Siri furthermore so that it understands our accent more fluently. We just wish that it happens soon!