Black Friday is nearly upon us, which can mean only one thing; shopping carnage. Year after year we see online and physical retailers reducing the price of popular items in the hope of enticing shoppers in to part with their cash. Some of those reductions offer insanely exceptional value and manage to cause a shopping storm as they work on a first come, first served basis. Essentially, when it’s gone, it’s gone. Retailers are now starting to introduce a number of “pre-Black Friday” deals to get shoppers into the groove. This is where Best Buy comes in with a nice little saving on all Apple Watch models that it stocks. Yes, all models.

A number of retailers have already outlined some of the deals that they will be offering when the 2015 Black Friday madness officially begins. However, it seems to be a growing trend that the same retailers who publish their deals also have a little taster discount applied to some products before the annual shopping holiday gets into full swing. There’s definitely some clever marketing in there as it gets shoppers in the mood and essentially prepares them for the higher level of discounts that will be applied when the time is right. 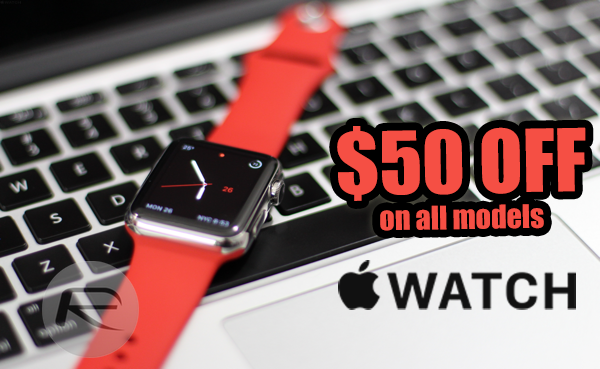 We’re sure Best Buy will have some extremely appealing deals come Black Friday, but for now, a $50 discount on every Apple Watch model that it stocks in itself is extremely appealing. That offer takes the 42mm Apple Watch with Stainless Steel Case and accompanying Milanese Loop band down from $699 to $649. The 38mm variant of the same model Apple Watch has been reduced by $50 to $599. For those that don’t want to part with that kind of money, but who still want to get an Apple Watch as part of this promotion, Best Buy is also offering the Apple Watch Sport 38mm in Space Gray with a Space Gray Sport Band for $299, reduced from $349.

Some of the available Apple Watch models on discount, can be seen below.

Potential consumers can also pick up a Rose Gold version of the above with a Lavender Sport Band for the same $299 outlay. There’s pretty much an option for every budget and every taste, and regardless of what model you choose you will still be getting the same quality hardware that Apple has built as its “most personal device ever.”