The popular iOS and Mac app djay 2 has has hit the Android platform. After almost four years of being offered as one of the best music mixing apps for users on iOS, the developers have finally released the app for Android users through the Google Play Store and the Amazon Appstore.

In case you weren’t familiar with the hype that precedes djay 2, the app is the closest-to-real-life DJ experience one can have on a mobile platform, with some surprisingly powerful features wrapped up in some very slick aesthetics given the very fact that that entire app is laid out like an actual turntable. Given djay 2’s stint with Mac and iOS, Android users will be pleased to see the same high quality maintained for the Google’s platform version of the app. 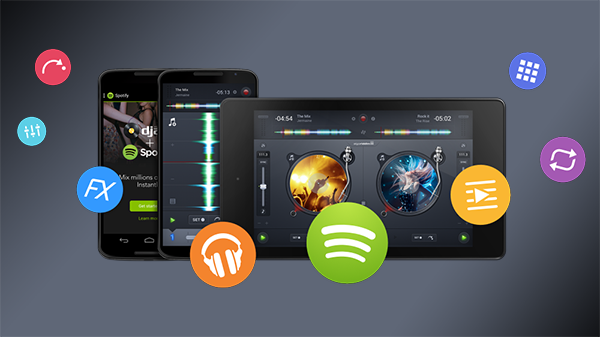 Akin to the updated iOS version, djay 2’s Android counterpart was launched with Spotify integration from the word go. Spotify integration here does not depend on the Spotify app as music is streamed directly to djay 2, seeming as if the music was stored on your device. For those not known for typically syncing their music library to their devices for one reason or another, this will let you get up to speed with your DJ ambitions. However, access is granted to your locally stored media as well.

This is not a half-baked attempt at porting the app to Android, as is evident from the intelligent scaling scene on various Android devices of varying screen sizes. Be it a tablet, or a phone, the app will intelligently scale itself for the screen size. As was the case with the iOS version of the app, djay 2 brings in all its suite of features to Android, including controls for playback and session recording, setting and jumping to a cue point, syncing tracks together, accessing playback tools and effects, crossfading and auto-mixing, key locking and speed changing, etc. 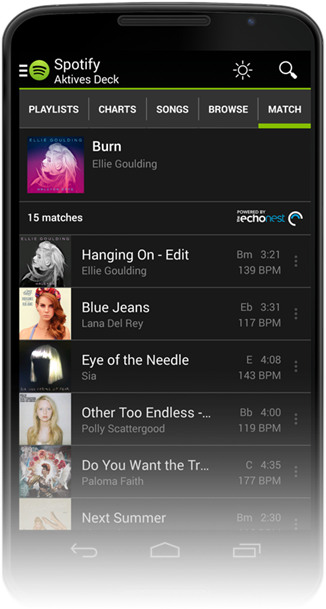 These were just the controls, the plethora of mixing and analyzing features the app contains may not actually be explored by many running it on their iOS or Android devices. The app is truly meant to inspire aspiring DJs with its close to a turntable like experience and precise controls.