Pokemon Go Gen 2 Update Release Date May Have Been Leaked

If a new leak is anything to go by, then Niantic’s Pokemon Go Gen 2 update’s release date may not be that far away now, with December 7th apparently pencilled in as the day on which the update will drop.

Earlier this month rumors started to circulate of no fewer than 100 Generation 2 Pokemon being added to Pokemon Go following the discovery of their names within the app’s code. No official announcement of their inclusion has yet been made by Nintendo or Niantic, the firm behind the game, but we know they’re there. It sure would be good to be able to catch them though, wouldn’t it?

If a new leak is accurate, then the wait to be able to do just that may be shortening, with December 7th said to be the release date for an updated Pokemon Go app. The source may be less than concrete though, so a pinch of salt is required, but we’re not going to let that dampen our mood too much!

The leak itself comes via a supposed Starbucks employee who claims to have seen an internal memo that outlines plans for Pokemon-inspired drinks and a possible deal between Starbucks and Niantic, which will see all Starbucks stores become drops for Lures.

There’s understandably some suspicion of the leak, particularly on Reddit where it was originally posted, but the leaker claims it’s all above board despite an obvious spelling mistake in the supposed corporate email.

I work at Starbucks and this is one of the most recent updates we received from corporate. Now, it’s hard to say whether or not this specifically refers to Generation 2 (although what else could it mean?), whether or not Starbucks and Niantic are partnered up, or if this will even be pushed out on the date specified (things don’t always go to plan). However, it all makes sense to me, but this would be a huge update. Based on the description of the event, it would require Niantic to put a Pokestop at every Starbucks. Lastly, I realize this may seem strange, especially with the “Pokeman”, but it’s a real email and I can send proof to the mods if required. Regardless, this isn’t anything concrete and pretty vague, and no other information was given to us. As a huge fan of Pokemon and Pokemon Go, I couldn’t NOT share the news with everyone. Fingers crossed that it’s gonna happen!

Both the original leaked photo of the memo and the above post have now been removed from Reddit, though that may say more about the leaker’s fear of being caught than the information’s authenticity. We should know more come December 7th, though. Fingers crossed for an app update! 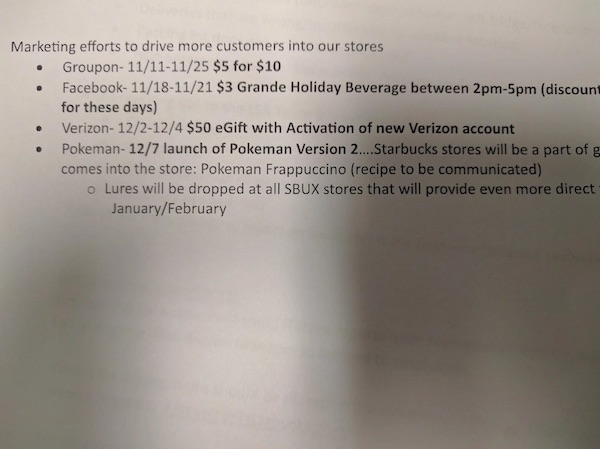