Pokemon Go Cheat Sheet: Species Stats For All 151 Pokemon In The Game

Pokémon Go is, without a doubt, the hottest mobile game out there right now. In fact, numbers and media attention would suggest it has, if I may use a Pokémon reference, evolved past that to become an international phenomenon.

The game, which is currently available on both iOS and Android, became the biggest mobile game in US history within a few days following its release, with statistics quoting 21 million active users, a number that likely continued to grow by leaps and bounds. 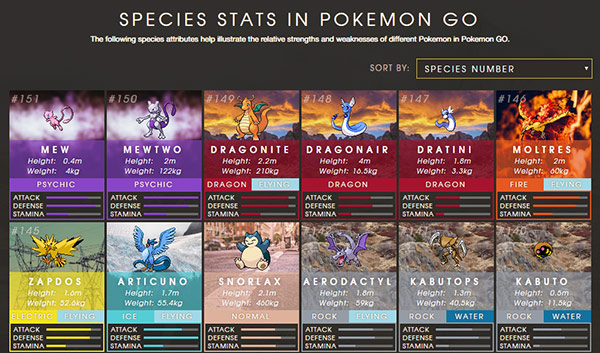 In its early days, the game was all everyone on the web ever talked about. Even now, the coverage may have slowed down somewhat, but the hype is very much alive. I might not know any hardcore fans of the game, but every friend of mine, regardless of age, is either playing the game or knows about it. If the same holds true for you and you have yet to hop onto the Pokémon Go bandwagon, you might now be considering it.

To the newbie, the game can be a tad daunting, with a roster of 151 Pokémon and several under-explained game elements. It is only natural to want something to help you get started. For those who are just looking for a detailed introduction to the franchise’s many pocketable monsters, there is a complete list of every Pokémon in the game over at thesilphroad.com/research, complete with species stats. These stats define the type, height and weight of each Pokémon along with their attack, defense and stamina ratings.

The list, which can be sorted by each individual statistic or based on the best combined stats, should prove to be useful for both new players looking to get an idea of how boss a collection of Pokémon they have in their personal roster, and veterans who have their Pokémon hit the Gym on a daily basis. It comes from The Silph Road, which defines itself as a “grassroots network of Pokémon Go trainers” geared towards facilitating the trade of rare Pokémon.

I guess I should thank them. I now know Mewtwo is the most powerful Pokémon out there.