Philips Hue Smart Bulb Widget For iOS 8 Teased, This Is What It Looks Like! [Screenshot]

Apple’s HomeKit framework may be barely a couple of days old, but there are still plenty of developers around the world who are sat pondering what they could do with such a framework. Being able to tie all sorts of home automation into one app is an awesome idea, but HomeKit wasn’t the only cool new addition to iOS at WWDC.

Philips may have been name-checked during the HomeKkit announcement, but it’s iOS 8’s new widgets that have the Philips Hue developers all sweaty, and with good reason. Having interactive widgets live in the iOS 8 Notification Center promises to change the way we use our devices, and Philips knows just that. 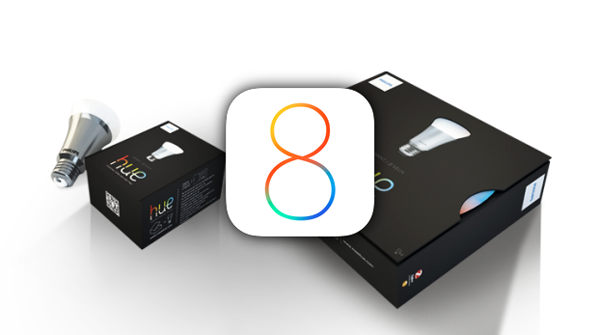 So, with widgets in mind the Philips Hue Dev Twitter account has just posted a screenshot of a concept for what the Hue widget could look like when iOS 8 ships later this year. With the Hue app needing an update to take advantage of widgets just like any other app, it’s great to see its developer already looking at where it can make use of the new iOS 8 features.

The concept itself shows a Notification Center widget that is probably one of the less awe-inspiring ideas we can come up with. Basically comprising of a row of what appear to be shortcut buttons, the widget would theoretically let users set their lights to reflect presets based on the button they tap, saving the need to launch the Hue app proper. 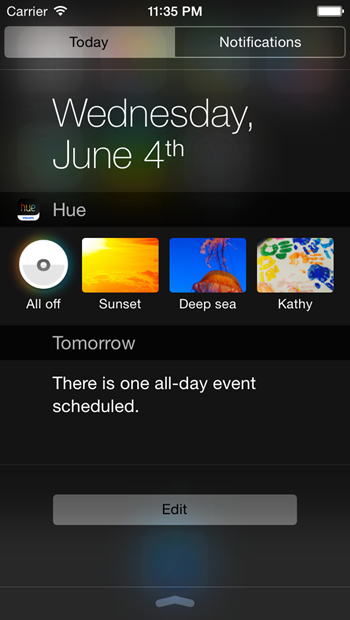 It’s good to see developers already warming to iOS 8, but as far as widgets are concerned, we can only hope that there are more interesting ideas on the horizon. Based on our limited knowledge of what Apple will allow inside widgets, we would hope that more can be presented to users than just a few buttons. It’s still very early days though, and we’re sure the developers of the Hue app will have more to bring to the tablet over the coming months.

With iOS 8 due to ship alongside the iPhone 6 around September time, everyone has plenty of time to get their collective heads down to make the best of what the new version of iOS has to offer.