Apple prides itself with its ability to get existing Mac owners to upgrade to its latest and greatest version of Mac OS X, and OS X 10.7 Lion is no different.

Web advertising firm Chitika has released new stats that show the take-up of OS X Lion since its initial release back in July, with the stats suggesting that users are staying away from the big cat since its initial speedy rollout.

Statistics for September showed that Lion had reached 14% of the install base across Macs, with the operating system’s low price and ease of install via the Mac App Store potentially helping the initial up-take.

By the end of October though, that initial growth had slowed considerably, and Lion’s share had only grown by a further 2%, reaching 16%.

The reasons for the apparent reluctance to upgrade by the masses are believed to be varied, with the early adopters already upgraded.

Lion has not been without its issues since it first went public. One such issue has been related to a long-running problem with WiFi connectivity. Poor connections, speeds and a general inability to stay connected to a router have plagued OS X 10.7, despite updates which were aimed at fixing them. Battery life on some MacBook Pro models has also suffered since the installation of Lion, for some people.

Even with the slowdown in installations, OS X Lion still finds itself outpacing the competition, with Microsoft’s Windows 7 only just overtaking its predecessor, Windows XP, two years after its release.

The most-used version of Mac OS X currently is the release that came before Lion, with OS X 10.6 Snow Leopard currently installed on 56% of Macs. Interestingly, 5% of Macs still run 10.4 Tiger, and 22% have 10.5 Leopard installed. 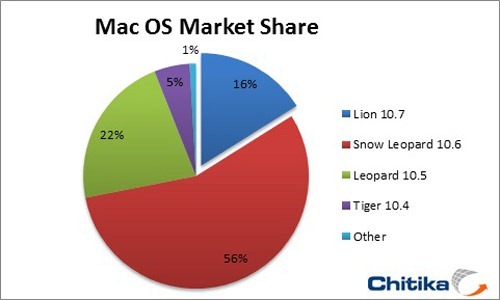 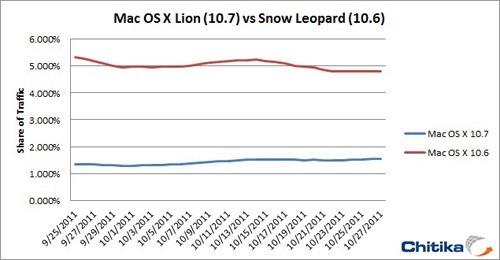 Now Apple has launched iCloud, and the iPhone, iPad and iPod touch have begun tying directly into Apple’s new syncing service, Lion has begun more necessary for those wishing to use all the new features Apple is currently bringing online. Apple’s user base is notoriously one for trying new things and wanting to keep up to date with the latest technology – expect that to be one of the driving forces behind people upgrading to Lion over the coming months, as new apps and services begin to require it.