Original Nintendo Switch Getting CPU And Storage Refresh, Here’s What You Need To Know

Shortly after announcing the Nintendo Switch Lite it appears Apple has something else up its sleeve. But rather Than the Switch Pro that people have been calling for it instead appears to be a mere change in specs for the existing machine.

Nintendo filed a new Class II Permission Change with the FCC which allows it to make alterations to a device that has already passed under the body’s watchful eye.

The Nintendo Switch obviously did that years ago, and this new filing allows it to make some alterations which it has outlined.

As the filing shows, Nintendo intends to change the SoC type which is basically the processor that the Switch uses. It also plans on altering the NAND Memory type, or the flash storage as you may better know it.

Both of those changes are likely to be to allow the company to use cheaper, less power hungry components rather than something that will increase performance. It’s possible the new SoC will be more power efficient however, so we may see improved battery life. 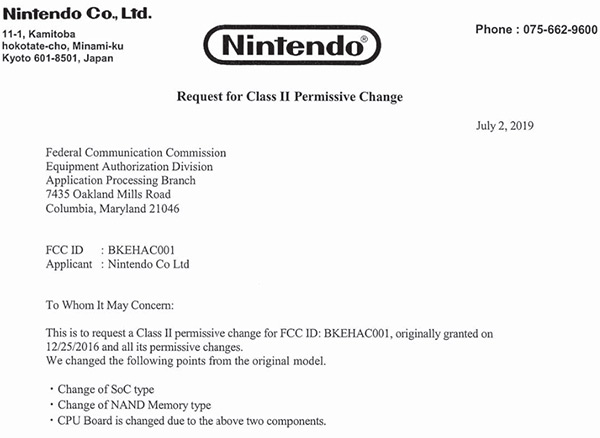 Given this is merely an amendment to an existing device it is not going to be the Switch Pro that has been rumored. Given that Nintendo would want to market that completely differently and under a new name, it wouldn’t be allowed to use this method of FCC filing for such a device.

The Switch Pro may still come, of course. It just won’t be this device that will launch in due course. In fact, we’d suspect Nintendo won’t even tell anyone which machines have these new chips inside, either.