Customers of T-Mobile in the United States have some good news to get excited about, with the official announcement that the network and Nokia have formed a partnership that will see them introduce and offer the Nokia Lumia 810 exclusively to T-Mobile customers.

The Finnish smartphone maker and Microsoft took to the stage in a joint event to announce the gorgeous Lumia 920 and 820 smartphones that would be powered by the new Windows Phone 8 OS. With a fantastic looking exterior and powerful set of technical specifications; the Lumia 920 is one of the most anticipated handsets of the year, but the fact that it will be exclusive to AT&T has left a bitter taste in the mouths of some who prefer to subscribe to other networks like T-Mobile.

The Lumia 810 that is being offered to customers in the deal is a variant of the mid-range Lumia 820 model that was introduced as part of the joint media event, and although it may not have the full technical specifications of the 920; it does still offer the fantastic Windows Phone 8 experience to those who desire it. The device is aesthetically similar to the 820 and will be offered with T-Mobile’s Unlimited Nationwide 4G data plans.

It doesn’t seem like consumers will be losing out with the Lumia 810, it features a 4.3-inch OLED Clear Black Display with a resolution of 800×480 pixels, Windows Phone 8 operating system and enhanced 8-megapixel camera and Carl Zeiss optics and a Skype HD certified front-facing camera. Apart from all that, the Lumia 810 also features wireless charging.  The fantastic Nokia City Lens software that was showcased during the Nokia event will also be available on the Lumia 810 and will allow users to quickly search for local points of interest and have information about each location overlaid on a map right in front of them. 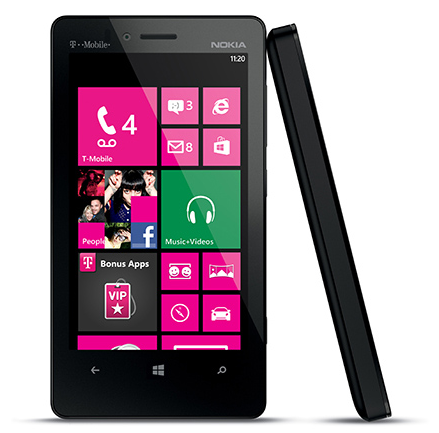 Andrew Morrison, Vice President of Product Management at T-Mobile USA, believes that customers will love the unique and exclusive offering that the two companies are bringing with the Lumia 810:

The Nokia Lumia 810 gives customers speedy, 4G access to T-Mobile’s nationwide network and the content and features they want, whenever they need it.

No official date of availability has been announced as yet, but the joint T-Mobile and Nokia press release states that the device should be available on the network in the coming weeks.