Microsoft and Dropbox may very well be committing against one another in the cloud storage space, but that hasn’t stopped them from signing up together to form a new Windows 10-centric partnership. Microsoft has had a great deal of success with its OneDrive cloud storage solution when it comes to getting signups and attempting to corner that market. Dropbox however has been equally, if not more so, successful, and are pretty much the first company that you think of when you consider cloud storage options. The two behemoths have come together to announce a new partnership designed to bring more cloud storage services to Windows 10.

The partnership essentially means that the two companies have come together to bring a new native universal Dropbox app for Windows 10 devices. The software has been carefully thought out and designed to bring cloud storage and productivity enhancements to a range of Windows 10-powered PCs, tablets. However, a Windows 10 Mobile version is not available right now, but would be released soon. This isn’t just your average file storage application that’s been quickly thrown together to solve a simple problem. What’s interesting to note is that the collaboration between Microsoft and Dropbox has produced a Dropbox app that will probably be deemed to be far superior to Microsoft’s own OneDrive app.

Steve Guggenheimer, who operates as Corporate Vice President of Developer Platform & Evangelism and Chief Evangelist of Microsoft, announced the partnership with an official statement:

Microsoft is excited to partner with Dropbox to bring more cloud storage and productivity services to Windows 10 across PC and tablets. With the arrival of Dropbox, Windows 10 fans have easy and convenient access to photos, documents, and files anytime, anywhere. 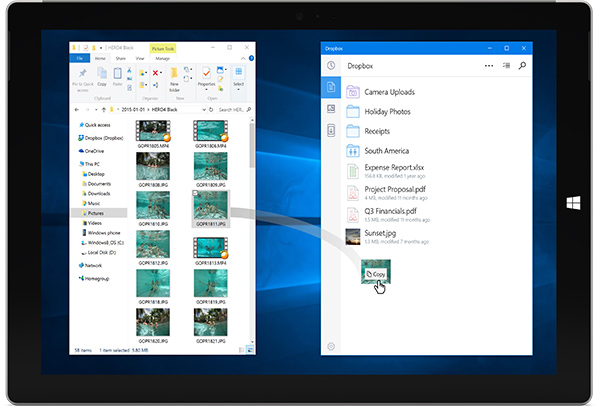 Those interacting with the Dropbox app on Windows 10 will be able drag and drop files into the Dropbox app directly from the File Explorer. The app ships with a really powerful and intuitive Quick Search functionality that should hopefully let users find what they need in a faster, more timely manner. Dropbox users will also love the interactive notifications that will allow certain processes to be completed on a system level without actually invoking and entering into the Dropbox app. Additionally, Dropbox has also added support for Windows Hello, meaning that it adds an improved layer of security over your content with biometrics. 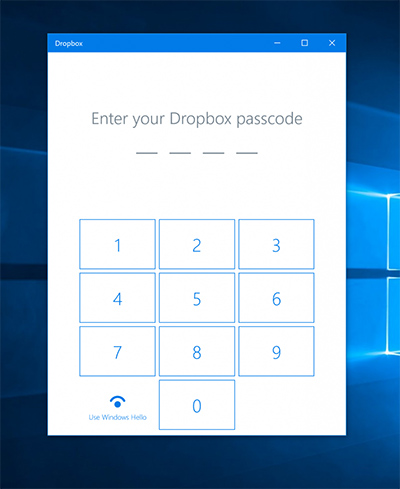 The app itself is available as a free-of-charge download and is rolling out right now.