Oh Nokia, you’re so funny. You might not be able to sell smartphones to many people, but you sure know how to make an ad that has us giggling behind our non-Nokia branded devices.

Keen to tout the virtues of its Lumia 1020, Nokia is on something of an advertising kick, launching what can only be described as attack after attack aimed at Apple’s iPhone. Seemingly forgetting all about the plethora of Android devices that are eating its lunch, Nokia’s distain for Apple is almost palpable, no more so than in its latest ad. 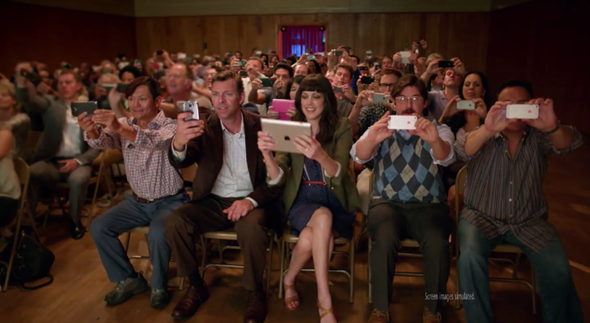 Based around a show being put on by some kids, the ad has proud parents climbing over each other in order to get closer to the action. See, their smartphones just can’t capture what’s going on form too far away, leaving an unseemly scrum as the only available avenue of photo taking left. That is, unless you happen to own a Lumia 1020.

Thanks to its enormous 41-megapixel camera, the Lumia can afford to have people take photos from further away. A little punching of the image here and there and everything gets zoomed in nicely once the image has been captured, and thanks to all those pixels, it looks terrific. So that’s the ad spot, and the whole thing revolves around that camera and the Lumia’s huge megapixel count. You’d have to sit right to the end of the spot in order to find that out though, as Nokia seems more preoccupied with poking fun at owners of the iPhone and iPad than it is about pushing its own device. In fact, the ad even has a very pointed dig at Apple’s own advertising campaign when one lady is heard telling a fellow non-Nokia user that more photos are taken with an iPhone every day than any other smartphone – a direct reference to Apple’s own iPhone ads. Of course, the remark does the lady no good and she is soon left prone on the floor by a disgruntled parent.

Nokia’s ads to make us laugh, but we can’t help but wonder whether there may be a better way than to take Apple on in a straight fight.