With iOS 7 just weeks away from release, much of the discussion has surrounded what developers will do with their own apps and how they will redesign their interfaces. As all eyes are on the developer community, it was almost forgotten that Apple too would need to update its own iOS apps to reflect the new interface that goes along with iOS 7.

Today, Apple updated its first app with that iOS 7 design that has caused so much controversy. Perhaps Apple’s least exciting of apps, ‘Find My iPhone’ today received the update that changed the app’s icon, amongst other things. 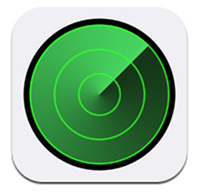 The update sees the app’s icon do away with the domed design that it previously boasted in favor of a more flat and generally more aesthetically pleasing solution that much more fits with Apple’s new design motif.

This update also brings bug fixes and stability improvements, apart from the new icon, something that third party app developers will no doubt be working on for their own iOS app moving forward. With iOS 7 expected to launch alongside the new iPhones that will be announced next month, updated apps will surely begin to hit the App Store around the same time. So yes, apart from the new icon, the rest of the design of the app remains unchanged.

New icon aside, there’s one major feature that this version of ‘Find My iPhone’ packs; it doesn’t work. At least, unless you happen to be a registered developer.

See, many users across Twitter and other social networks are now reporting that launching their updated ‘Find My iPhone’ app is leaving them unable to get a great deal further thanks to the app asking for developer credentials. Obviously this is something most people won’t have, so that’s about as far as things get. We are all registered up here, and we can report that the app does indeed work for us just fine, so it would seem that Apple has somehow managed to push a developer-only version of the app to the App Store. Presumably the Cupertino firm will get that pulled and the proper version published ASAP, but at the time of writing this, such a thing is yet to happen.

There’s nothing like a good Apple trolling on a Thursday evening now, is there?