The Samsung Galaxy S5 has sold well during its first week-and-a-half in the retail market, and its maker’s famed advertising machine, which has been in full flow once again, must take a fair amount of the credit for these strong early sales. In its latest campaign, the Korean company shows off the ruggedized nature of its latest humdinger, offering insight into its water and dust-proofing capabilities.

These videos are meticulously created to ensure that the Galaxy S5 is made to look like a champion, but we already have a good idea of how rough and ready the Samsung Galaxy S5 is thanks to a series of torture tests compiled by the usual suspects on YouTube. In one video, for example, the device lasted for several minutes in boiling water before finally giving up the ghost, and in another, the handset simply refused to die – even surviving the usually lethal test of being run over by a car. 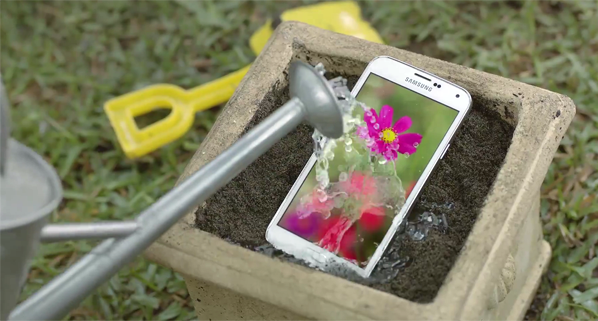 Last time around, the Galaxy S4 wasn’t particularly robust, with consumers wanting a tougher smartphone forced to opt for the Galaxy S4 Active. But even though said handset proved relatively successful, the question was always raised as to why the flagship couldn’t just be dust and waterproof in the first place, and thankfully, Samsung has obliged with the Galaxy S5 by including these potentially device-saving features as standard.

If, even after the various durability tests, you still need a refresher of just how hard the Galaxy S5 will be to shut off, then be sure to check out the new advertisement recently rolled out by Samsung, which we’ve embedded below.

The aim of the game here is clearly to entice those with young, unpredictable children to grab the Galaxy S5. No matter what kind of mess the little ones decide to make, the Galaxy S5 will continue to function, whether shot at with a water pistol or covered in flour.

I don’t know about you, but despite all this coverage of how resistant the device is, I’m still way too afraid to drop my Galaxy S5 under the tap. I mean, what if I happen to own that model that wasn’t sealed properly?