Watch What Happens When Galaxy S5 Faces A Hammer, Gets Boiled In Water [VIDEO]

The Samsung Galaxy S5 is just a few days from releasing, but some lucky individuals have managed to get their hands on the device earlier than billed. But while many of those with early access have given us a run-through of the numerous features that Samsung has bundled into the new handset – something we are certainly grateful for – others have used their privileged access to the new hardware to satisfy an appetite for destruction. It’s certainly arguable that the videos that invent elaborate ways to destroy gleaming new devices are the most enjoyable of all, and a couple of new clips showing a hammer and a boiling water tests only further emphasize this point.

The guys at TechRax have proven a constant source of entertainment since Samsung announced the Galaxy S5 back at February’s Mobile World Congress, and while they’ve been steadily damaging their way through a seemingly endless supply of Galaxy S5 units, the boiling hot water and hammer-’til-death tests are arguably two of the most daring. 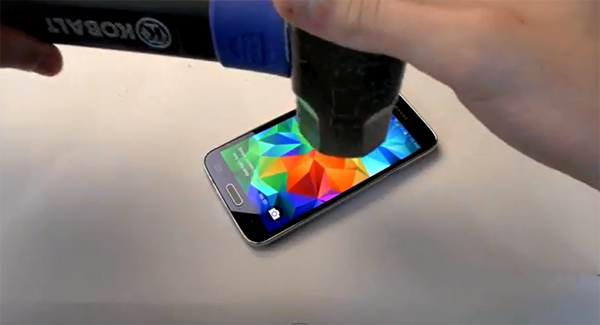 As you’ll see from the clips embedded below, both Galaxy S5 units meet their demise, but if you suspected that the heat and pressure of boiling water would prove the most explosive, you’re in for a surprise. I won’t go into too much detail, because I don’t want to spoil the climax, but let’s just say that it’s very unlikely that either handset will be used again in a hurry.

Given that the device is waterproof, though, it shouldn’t come as much of a surprise that when submerged in boiling water, it lasted quite a bit longer than its predecessor in the corresponding test that TechRax carried out last year. But still, in case you were under any illusions, throwing your smartphone in a simmering saucepan or hitting it firmly with a hammer – or any large object, for that matter – is never a good idea.

Check out both video clips below, and be sure to brace yourself for some twists and turns along the way. How the cameraman manages to stay so close to the action – given the potential for explosion – I will never know, but the precariousness of the situation only adds to the overall enjoyment.