Remember Ultimate Extras from Windows Vista’s era? Well, it seems like some of those Ultimate Extras are going to make a comeback on Windows 7, but this time in the form of free apps. Paul has confirmed that Microsoft is set to release two popular games from Vista Ultimate Extras on Windows 7 via Games for Windows Live. What’s even more exciting is that these two games will be available free of cost and will run on all versions of Windows 7. A specific release date hasn’t been finalized yet. Games for Windows site states it as "coming soon". 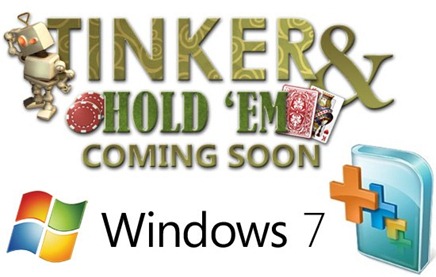 Need a break? If you like classic platform puzzles, or just want to play a quick hand of cards, we have a couple of great new games coming soon to Games for Windows! Here’s the best part…both of these games will be absolutely FREE!!

The two games that are expected to be released for Windows 7 are Microsoft Tinker and Hold ’Em. Tinker, essentially is a puzzle game in which the goal is to help a robot reach his home by solving all the misleading puzzles. Tinker offers 60 different puzzles for you to solve and master. You can find more about Microsoft Tinker, including a video demo from our review posted here.

Even robots get lost, sometimes! Help this one get home by solving puzzles that untangle a surreal and misleading world…but be careful! Tinker only has a limited amount of energy, so you’ll have to use it wisely or he’ll be lost forever! A classic mental challenge for the entire family, Tinker features an original score, compelling visuals, and 60 levels of classic puzzling fun!

Hold ’Em, on the other hand is a poker game. In this challenging game, you have to play a game of cards, with your computer being your opponent. Hold ’Em brings customization options such as changing the look and feel of the card deck and the playing table.

Pit yourself against the computer for a high-stakes experience that won’t empty your pocket! Play with up to five computer opponents, and customize the look of the card deck and playing table. Have fun and bet what you want — the computer can’t make you pay up!

I would love to see Windows DreamScene make a comeback on Windows 7! Its been a while since I last showed off my animated video wallpaper to my friends. What about you? Are you excited about Ultimate Extras making a comeback on all versions of Windows 7 in the form of free apps? If yes, then which Ultimate Extras app are you most looking forward to? (hat tip @tom_warren via twitter)