As a generation of people, we should consider ourselves extremely lucky to live in a age which represents the cutting edge of technological breakthroughs and advancements. Rarely a day seems to go by without some new technology-based product being released to the public, whether this is a new smartphone or tablet, a new flat screen high definition television set or hopefully something more out there and unique in the not too distant future like the proposed Google’s virtual reality goggles.

Sometimes large companies also treat us by taking the secret wrapping paper off some extremely exciting conceptual designs or products, or better still, actually show us some real life products in the making which have been born out of years of behind closed doors research. I’m not sure about you guys, but I always get an extra sense of excitement if I know something has been produced as a result of intense ‘research‘, it makes it seem more important somehow. 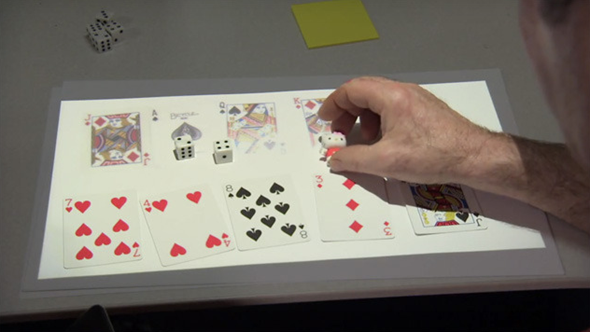 In recent time we have been used to companies pumping out innovative products. We have become accustomed to seeing patent applications being submitted by tech companies which tease consumers into an attempt of guessing what the patent could be used for. As part of their Tech Forum Event, a couple of researchers from Microsoft have been demonstrating one of their research projects known as ‘Illuminishare’ which sounds like something right up our street. As Sasha Junozovic, a Post Doc Researcher at Microsoft Research puts it, "Illumishare allows users to share arbitrary physical or digital objects on any surface".

The system allows users in remote locations to be able to see exactly what the other is doing on any given work surface thanks to a single device which has the appearance of a standard, albeit a large one, a desk lamp. The overhead lamp looks down upon the work surface, using integrated lighting system to illuminate the working plane and a camera-projector system which captures video from the working area and projects it to the connected remote user, and vice versa. The relatively simple system allows both parties to interact with each other in real time and see exactly what is happening on each work area. The demonstrations giving in the video by the research team show a card game being played, as well as assistance being given in a mathematics quiz which offers a real world use for this technology.

The project itself is still in the working concepts stage but represents exciting potential for the progression of remote interaction and clearly has a vast number of real world uses in the education and business sectors. The idea itself is very simple, with the technologies involved not representing anything out of the ordinary. However, Sasha Junozovic is keen to point out that although the idea is a simple and perhaps an obvious one, the team did need to overcome some fairly complex challenges to get to this stage, with video echo being a big problem.

With the majority of challenges overcome, the Illumishare project seems like it could offer an endless array of possibilities in the real world. Let’s keep our fingers crossed that this isn’t another research project that falls by the way side.