Microsoft today released a new video, hot on the heels of its vision of the future, showing off one of it’s most popular creations of 2010 – the Xbox Kinect. 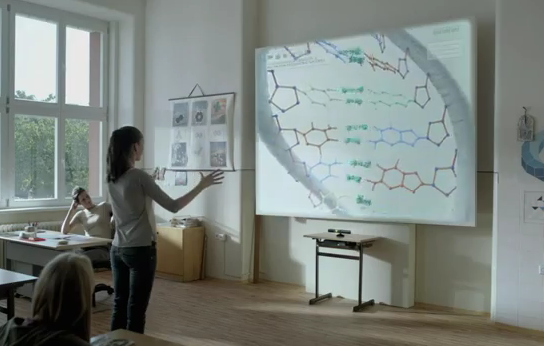 Believe it or not, Microsoft’s Xbox Kinect is one-year old today, and my, how they grow up so fast.

The Kinect took sales charts by storm last year, with millions being sold to eager Xbox 360 owners just itching to kick things and throw themselves around in front of Microsoft’s little camera. Apart from that, it bagged the title of ‘fastest selling gadget of all time’, now that’s something worth bragging about!

While the Kinect has sold like gangbusters to those wanting to get the latest and greatest gaming accessory, many would argue that the accessory hasn’t held up to its early promise. With games very much leaning toward to novelty side, with mini-games galore, more than a few Kinects are sat gathering dust under televisions across the globe.

But it’s not all bad news for Kinect. A massive, and super keen homebrew network as sprung up, with Microsoft’s 3D sensor sat right at the heart of it.

People have made the Kinect work with just about anything, with smartphones and computers seemingly the favorite amongst those clever enough to hack it.

It’s almost like Microsoft has been watching them as they take the Kinect into areas they never foresaw, and this video put out by the Redmond company almost admits it.

Feeling suspiciously like an Apple ad, the video shows the Kinect being used in all kinds of weird and wonderful ways, from helping a child during physiotherapy, to providing bomb disposal experts with a means of communicating with their robots.

The musical world has been feeling the force of Kinect too, if you believe everything you see on the internet, and Microsoft’s video shows people playing imaginary instruments thanks to the power of Kinect.

With Windows 8 due to sport support for Microsoft’s Xbox accessory, the Kinect could possibly find itself attached to more computers in the future, as Microsoft presumably tries to take the technology it developed for gaming, and find a home for it in the office.

So how do you fancy waving your arms around in front of your boss all in the name of changing PowerPoint slides? We’re hoping Microsoft and third-party developers can come up with something a little more exciting than that, but the possibilities are indeed endless.