If Apple gave every individual the chance to design their own hardware that catered for their own needs perfectly and fulfilled their aesthetic desires, then I am pretty sure we would see a collection of weird and wonderfully bizarre Macs knocking around the world. Fortunately for our sanity, they don’t offer such a bespoke design service, meaning we will just have to live with the excellence that they currently provide, but that doesn’t stop designers from producing their own unique concept designs. 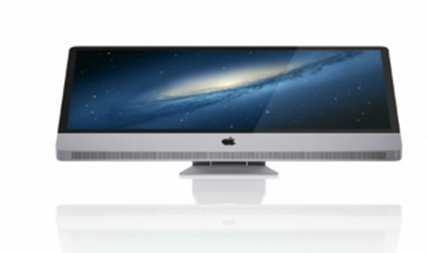 One such designer is Joakin Ulseth, who is currently plying his trade as a 3D animation student and has produced a concept design of what he believes a touchscreen capable iMac should look, feel and operate like. It seems rather bizarre to imagine a 27-inch iMac cinema display with a touchscreen, and from a personal standpoint I happen to agree with Steve Jobs about the fact that it just doesn’t feel natural touching the screen of a desktop-based computer. However, Ulseth has based his design around an Apple-owned patent that allows the iMac to stand on an adjustable and flexible base, meaning that the screen can be manipulated by the user.

Ulseth has packed the power into his imaginary device and believes that the Apple iMac Touch concept with the Flex Base running Mountain Lion and iOS 5 will give users "power at their fingertips". So what about the specification of this powerful, dual-OS, touch-capable imaginary beast? Well, the designer imagines his Mac will feature a 27-inch touch-capable Retina display with 4096×2304 HD resolution, which results in a pixel density of 174 pixels-per-inch.

Apple’s digital assistant Siri would also run on the Mac as part of the iOS 5 installation, giving users voice control over the iMac and hence increasing productivity. Intel’s new i5 and i7 Ivy Bridge processors, which are set to power Apple’s official refresh of the Mac range, will be running under the hood along with the inclusion of two individual Thunderbolt ports for that all-important high-speed data transfer.

The imaginary specification of this concept machine is actually quite juicy, but does it even come close to representing the future of desktop machines in Apple’s eyes? I personally can’t imagine a world where interacting with a desktop machine via touch would feel natural or right, but Apple do have a knack of making the impossible work.