With the introduction of iOS 4.0, Apple brought the current native multitasking system to us that allows users to quickly switch back and forth between apps that have been recently used and currently reside in the switcher tray. Those said apps can be accessed by double pressing the Home button on the device. Developers who cater for jailbroken users through the release of Cydia-based packages have been coming up with and launching tweaks that investigate additional ways to switch between apps.

The SpinTask tweak is yet another app switcher to hit Cydia, but is smart enough to not only hook into and display backgrounded applications from the multitasking tray, but also allow users to set up four of their favorite apps for quick launching. The tweak is designed with the main task of allowing the user to invoke one of four apps quickly and efficiently, which one would assume is meant to remove the laborious task of having to sift through folders of apps to find the right one.

After installation, SpinTask does not provide any additional home screen icons for user interaction, but does come bundled with its own preferences entry within the native Settings app in iOS. The SpinTask settings allow a decent amount of configuration for the tweak, allowing users to configure certain aspects of it to suit their needs and tastes. Perhaps the most expected option is the ability to alter the gesture that is used to invoke the tweak and bring up the switcher display. SpinTask comes with the Activator header files included, which gives users all of the standard gestures and button press choices that they have become accustomed to. 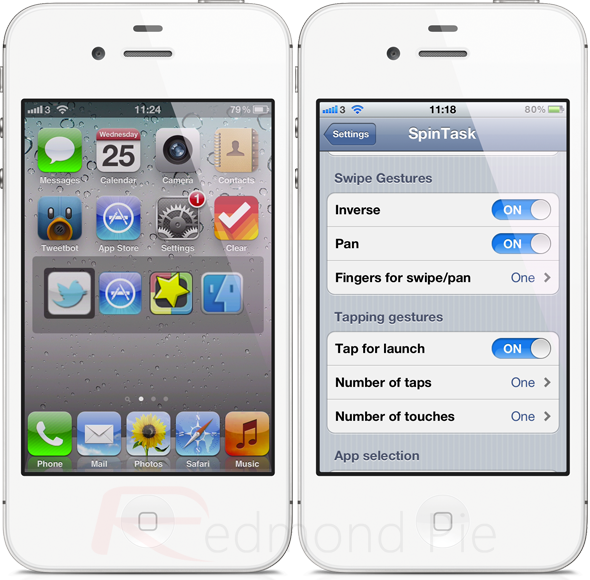 The rest of the configurable options pertain to how the user actually want to interact with the tweak, and allow customization of how many taps should be expected before the apps are launched, as well as changing how the swipe gestures are interpreted through the pan and inverse settings. Finally from a settings point of view, users can select four apps from the installed set of list that will be displayed in the overlaid view when the tweak is invoked. If this section is ignored, SpinTask will pull four apps from the multitasking section of iOS and display them instead.

SpinTask is available as a free of charge download from the BigBoss repository and requires a device running iOS 5 or above.