Users of a Mac, or even a Windows-based PC, will be aware of the fact that you can flick between running apps by using the command/Alt and Tab buttons together. A quick press of these two buttons will flick to the last viewed app and back again. However, if you hold the buttons down together, a nice little view is overlaid on the screen which shows all of the running apps and allows the user to toggle between them all and choose one quickly. An iOS developer known as coffeejayyy has decided to make an iOS implementation of that feature and has called it CmdTab, available in Cydia now.

CmdTab for iOS works via an Activator gesture, which when invoked brings up a very similar overlay on the screen with the difference being that CmdTab doesn’t show a list of running apps but instead has a number of hard-coded shortcuts. The shortcuts included allows you to compose a text message, access Wi-Fi settings, open up the default Twitter app, launch Cydia and launch the Music app on the device. The view can be dismissed by pressing the Home button and leaves elegantly with a nice animation. 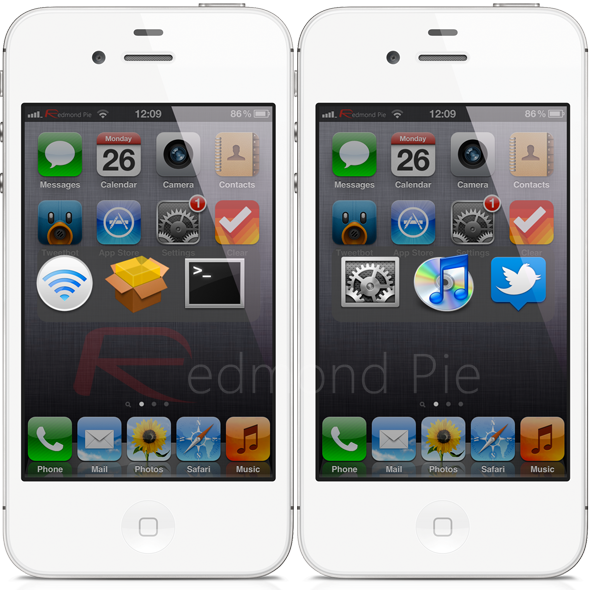 All in all, CmdTab is a nice little implementation of the Mac OS X feature, but it falls down in a couple of places for me. To be a true implementation; I would require it to effectively rework the iOS multitasking and display the apps which are currently backgrounded. The developer has chosen to not make the CmdTab tweak about multitasking, but instead about quick launching certain things on the device, which in itself is fine. However, the tweak would be a lot more powerful if it came with a settings option, allowing users to choose their own shortcuts rather than have to live with the developer’s choices. With that said, CmdTab is a very polished and pretty tweak and considering it is free of charge, is definitely worth a look.

CmdTab is available as a free of charge download from the ModMyi repository and lists no particular device or software requirements.