The iPhone is a bit of an all rounder, that it handles its core purpose extremely well, while managing to carry out a whole host of other tasks. However, that doesn’t mean that it doesn’t have its fair share of issues.

In the past we have seen Apple push out point releases of their iOS operating system in order to fix slight issues such as battery life, Wi-Fi connectivity problems and also signal issues. Back in July of 2010, Apple released iOS 4.0.1, with the only change mentioned being an improvement to the algorithm used to display the signal bars on the device which was welcomed with fury over the so-called antennagate scandal.

The company announced that the issues that some users were experiencing with the drop of signals was largely exaggerated due to the fact that the calculations used to display the signal strength in iOS 4.0 was erroneous, leading users to see a larger drop in visual indication than what was actually happening. 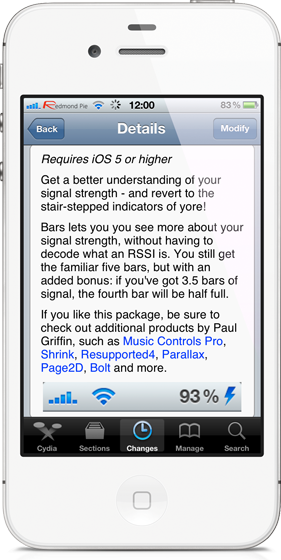 The signal bars issue is something that has pretty much been put to bed over the last twelve months, but for those who wish to have an accurate visualization of just what is happening with network strength, then iOS developer Paul Griffin has released a little side project he has had lying around for quite some time called Bars. The purpose of the Bars tweak is to give a better, and more accurate understanding of the iPhone signal strength by using stepped indicators that accurately portray what is happening. Signals are still represented by the familiar five vertical bars in the top left hand corner of the device, but Bars make a slight adjustment by making the last bar full or half depending on the strength. As an example, if a particular iPhone had 3.5 bars of real world signal, the last vertical bar would be displayed as a half bar to reflect that.

Bars is free of charge tweak, available to download from the BigBoss repository and requires iOS 5.0 or higher.