iMac Touch Shows Up in a New Patent Filing by Apple

Not so long ago, we covered about Apple’s rumored plans to launch a new iMac with a multitouch display which will run a iOS 4 layer on top of OS X to use touchscreen capabilities. Well it looks like we are finally going to see a touchscreen computer from Apple after all. A new interesting patent has just popped up which shows a touchscreen capable iMac dubbed as the “Apple iMac Touch”. 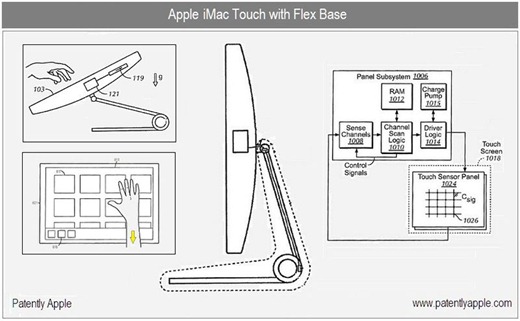 According to the patent’s description, the touchscreen sensors will lie in the hinges of the frame of the iMac Touch, which will automatically adjust its settings based on the screen’s orientation. The patent however, does not mention anything about what type of OS it will run, but we’re assuming that it will run the next version of Mac OS X i.e. 10.7 alongside iOS 4 for touchscreen capabilities. Using iOS 4 on a huge touch screen would be one hell of an experience. Apple usually keeps quiet about such products until the day they’re unveiled, this is just a patent, we’re not sure how long it will take to go into production. [Patently Apple via 9to5Mac]