The greatest strength of Apple and its iPhone has always been the availability of nearly 200,000 apps in the iTunes App Store. No other phone manufacturer has so far been able to match the success that iPhone’s App Store has got. This amazing success of the App Store has led to people wondering if Apple would bring such a business model to its OS X platform as well.

There were rumors flying around that one of the highlights of the upcoming OS X 10.7 would be an iTunes like App Store for Mac, which would need Apple’s approval, and would be one conveniently place to find and buy softwares while Apple will take care of all the security. A Mac developer Fernando Valente wrote to CEO Steve Jobs for clarification in this regard. As usual, Jobs reply was short; saying “Nope” to all such rumors. 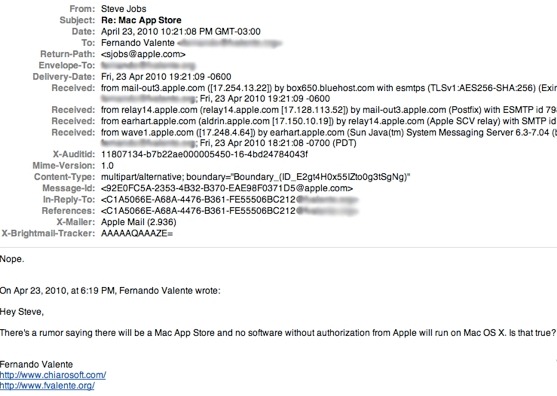 What do you think about this? A good call by Steve? or would you have preferred an App Store like model for OS X? [via MacStories]