Meet The MacBook Touch: The Ultimate Fusion Of An iPad With A MacBook [VIDEO]

Remember those rumors a few years back about the possibilities of Apple releasing some kind of magical and revolutionary touchscreen Mac contraption? If you do then you will no doubt remember that they were quickly squashed due to the fact that they believed using a touchscreen interface on a Mac-like machine would prove to be unnatural and offer a terrible user experience. The company quickly followed up with the launch of the original iPad, a device that has achieved phenomenal success. 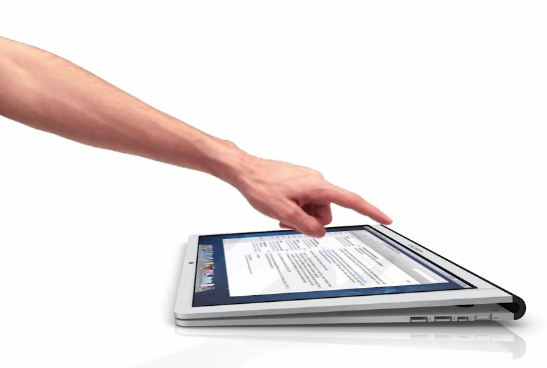 That touch screen Mac idea may never have made it to the Apple brain storming sessions, but that never stops designers from creating concepts of products that they would like to see Apple make, or think would prove popular in the marketplace. We have seen iPhone and iPad concepts, and now it’s the turn of the conceptual MacBook Touch, which you can see showcased in all its entirety in the embedded video. The concept should appeal to those individuals who still crave to have a physical keyboard on their devices, but who always want the versatility that the iPad brings to the table.

Obviously this product isn’t, and never will be real, but it does go some way to envisaging just what a device would look like if ever a MacBook Pro and an iPad were fused together in some kind of bizarre experiment. I have to admit, the whole thing appeals to me, but that could be something to do with the fact that if you slap an Apple logo onto it then I would probably give it a whirl before making any sort of judgment. Although it may be aesthetically pleasing, it doesn’t take a genius to see that the Touch would never work in the real world due to that crazy hinge that seems to be the center piece of the machine.

I should imagine that the MacBook Touch concept is more a showcase of the designer’s skills rather than an attempt at actually creating a mockup that they believe could hold some relevance in the real world. The usability of such a device is pretty much non-existent, and although I actually think it looks like an attractive piece of kit, I think I’ll stick to my individual iPad and MacBook for the foreseeable future.