The rollout of macOS Sierra 10.12 continues as Apple pushes closer to a final public release this coming fall. After releasing beta 3 earlier this week to registered developers, Apple has now officially made macOS Sierra public beta 2 available to testers registered on the Apple Beta Software Program.

Today’s pre-release build for testers is exactly the same as the version released earlier this week to developers, and gives public testers the opportunity to interact with all improvements, including testing if previously discovered bugs have been fixed. 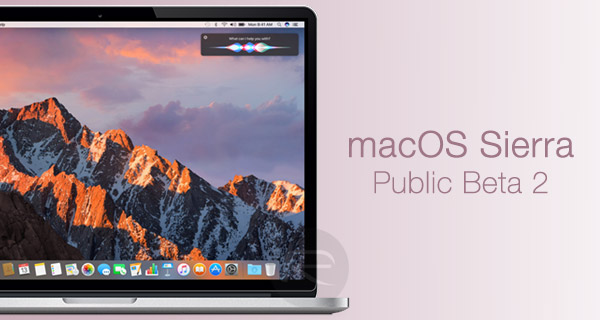 At this stage in the development of macOS Sierra, and taking into account not only the fact that it’s actually a third beta (second beta to testers), but also the fact that it’s large revamp of the platform, there are no really outward-facing changes being introduced for testers to interact with and sink their teeth into.

As part of the dedicated macOS discussion during last month’s opening keynote of WWDC 2016, Apple extensively covered everything that’s new in Sierra, including things like the integration of Siri that can not only answer questions, but is also deeply integrated into the platform to locate files and perform specific tasks. macOS Sierra also introduces improvements to how Photos are managed and interacted with, including a stunning new Memories feature that is also available as part of iOS 10.

There’s Auto Unlock for Apple Watch owners, ability to pay for goods and services via Apple Pay through Safari, and even copy and paste across multiple devices. Of course, all of those features were introduced with beta 1 of macOS Sierra immediately after the opening WWDC keynote, and are continued to be worked on with each resulting pre-release seed.

The availability of macOS Sierra public beta 2 focuses on internal improvements and usability enhancements that should hopefully make Sierra a much more pleasurable environment to interact with. There’s also a focus on security and bug fixes to make the platform as secure and private as possible, which was something Apple was keen to address during WWDC.

Any public tester with a previous public beta version of macOS Sierra installed on a compatible iMac or MacBook is able to upgrade to the latest beta immediately via the Mac App Store. Of course, for those that aren’t registered to test beta software from Apple, and who would ultimately like to be, can follow our guide on how to get started here: macOS Sierra Public Beta: Download And Install The Right Way [How-To Tutorial].