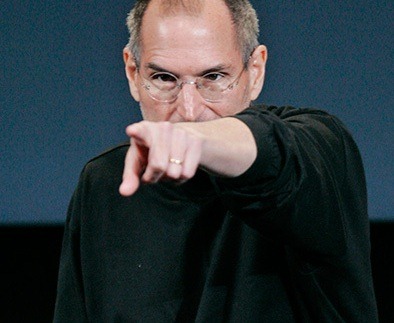 Google loves to characterize Android as open, and iOS and iPhone as closed, we find this a bit disingenuous and clouding the real difference between our two approaches.

In reality, we think the open vs. closed argument is just a smokescreen to try and hide the real issue, which is, what’s best for the customer, fragmented versus integrated. We think Android is very very fragmented and becoming more fragmented by the day.

We also think our developers will be more innovative if they can target a singular platform rather than 100 variants. They can put their time into innovative new features rather than testing on 100s of different handsets, so we are very committed to the integrated approach, no matter how many times Google tries to characterize it as closed and we are confident it will triumph over Google’s fragmented approach.

On RIM (Research In Motion):

We’ve now passed RIM and I don’t see them catching up with us in the foreseeable future. They must move beyond their area of strength and comfort into the unfamiliar territory of trying to become a software platform company. I think it’s going to be a challenge for them to create a competitive platform and to convince developers to create apps for yet a third software platform after iOS and Android. With 300,000 apps on Apple’s App Store, RIM has a high mountain ahead of them to climb.

Our potential competitors are having a tough time coming close to iPad’s pricing even with their far smaller, far less expensive screens. The iPad incorporates everything that we’ve learned about building high value products from iPhones, iPods and Macs. We create our own A4 chip, our own software, our own battery chemistry, our own enclosure, our own everything, and this results in an incredible product at a great price. The proof of this will be in the pricing of our competitors products, which will likely offer less for more. These are among the reasons why we think the current crop of 7” tablets are going to be DOA. Dead on arrival. Their manufacturers will learn the painful lesson that their tablets are too small and increase the size next year, thereby abandoning customers and developers who jumped on the 7-inch bandwagon with an orphan product. Sounds like lots of fun ahead.

You can listen to the audio which is embedded in the YouTube video below: