We may have been provided with our first sneak peek of what the upcoming Galaxy S8 will look like, and it has come from within a leaked Samsung app for the existing Galaxy S7 smartphone.

You may be familiar with the news that a leaked version of the Secure Folder app for Samsung’s Galaxy S7 has appeared online today, and while the app was previously only available for the Galaxy Note 7, the company previously suggested that it would be coming to the Galaxy S7 following the rollout of Android 7.0 to the device.

If you’re running that particular version of Android already, then you can install the app now if you get your hands on it, and that’s great. What we’re more interested in is the images used in the app, because they look a lot like they may give us a glimpse of the Galaxy S8.

Leaks and rumors for what Samsung has up its sleeve with the Galaxy S8 have pointed us in the direction of a new, all-screen front panel with no buttons and minimal bezels. That, at this point, is almost a given but we have yet to see anything official from Samsung that would give the game away. Perhaps that just happened with this leak.

As can be seen below, images in the newly leaked Secure Folder app depicts a smartphone that appears to show what we expect the Galaxy S8 to look like – no buttons on the face of the device, and a bezel so small it’s as if it’s not there. 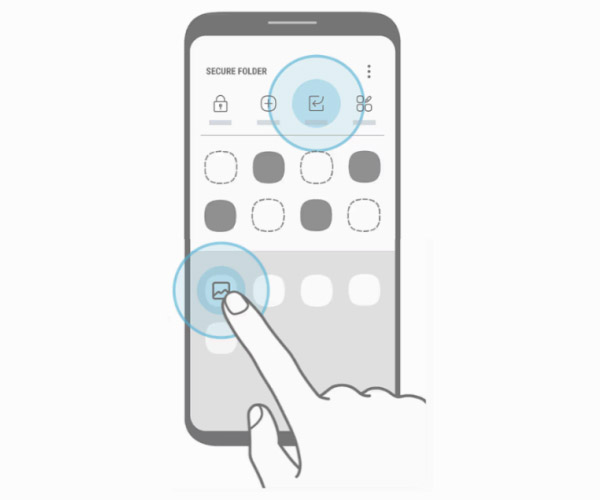 All in all, the drawings used in the app do look like they may be our first official glimpse at what the Galaxy S8 will look like, even if it is an vector graphic of the phone rather than a full-blown render or a slew of photos like the ones from previous alleged rumors and leaks.