Apparently, real photo of Samsung Galaxy S8, along with its specs, price and release date has been leaked. Here are the details.

2017 is a big year for Samsung, and the Galaxy S8 is the phone that the company’s hopes are currently riding on for taking it out of a post-Galaxy Note 7 gloom and into a bright new future. Hopes are high that the Galaxy S8 will prove popular amongst fans of Samsung’s previous flagships, and in order to try and ensure that is the case, the company is pulling out all the stops. In a new leak by Evan Blass via VentureBeat, we’ve now been given our first proper look at the Galaxy S8, and we now also have more details on what it will bring to the table as far as features are concerned.

The first thing that needs to be mentioned is the fact that two Galaxy S8 handsets will be on offer this year, similar to previous years. However, this time around, both sizes will feature Samsung’s Edge technology, meaning curved screens are the order of the day here. There will be two different screen sizes on offer though, and both will be huge.

According to Blass, Samsung’s new Galaxy S8 will feature 5.8- and 6.2-inch QHD Super AMOLED screens that cover 83 percent of the phones’ faces. That’s a huge percentage, and means that these devices will look as close to bezel-free as we’ve seen so far.

That’s thanks to the lack of a fingerprint sensor on the front of the device, with Samsung opting to move it to the rear. Other phone makers have done the same thing in the past, so this shouldn’t be an issue. However, the placement of the sensor – to the side of the camera – may be less than optimal. We’ll have to wait and see on that.

Beating at the heart of the new phones will be a chip based on 10nm architecture, and depending on the region in which the device is sold, that chip will either be a Qualcomm Snapdragon 835 or a Samsung Exynos. Both will offer a reasonable speed bump over last year’s Galaxy S7. The new handsets will carry 4GB of RAM, just like the Galaxy S7 and 64GB of storage will be the base this time around. An SD card slot will cater for those who need an additional bump – cards up to and including 256GB are supported. 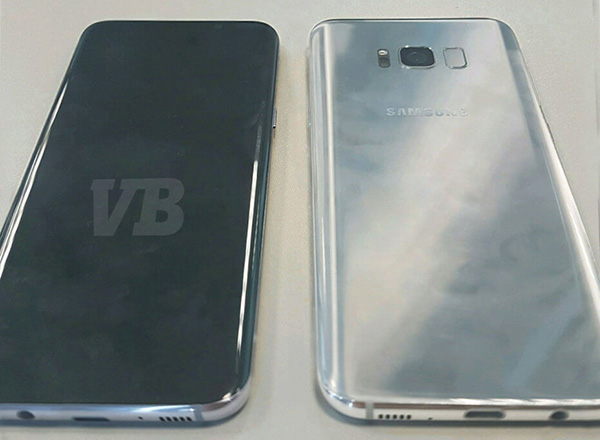 Other notes of interest are the use of a USB-C charging port and the inclusion of a headphone port, both of which will be well-received for differing reasons. The device will run Android Nougat, as is to be expected, and Blass says the handset will be announced at an event in New York on March 29th. Those already looking forward to placing orders will be able to buy a Galaxy S8 on April 21st. The 5.8-inch model will retail for €799 (~$850) and the 6.2-inch model at €899 (~$960). That’s €100 (~$107) more than the current models.