When Apple introduced Face ID with the iPhone X last year there was a suggestion that the company had been trying to create an in-display fingerprint sensor instead. With the launch of three new iPhones this month, all featuring Face ID, the question has arisen as to whether we will see Apple return to fingerprint sensing technology at some point in the future. According to renowned Apple analyst Ming-Chi Kuo, that’s not likely to happen, at least not as soon as 2019.

In a note sent to investors, Kuo says that he does not expect the 2019 iPhones to include support for fingerprint sensing technology built into the display, a technology that could allow Apple to either offer both Face ID and fingerprint sensing or ditch Face ID, something that is even less likely. Apple has already killed off the physical Home button as part of its move to Face ID and there is absolutely no suggestion that will return, either.

As a result of not moving back to fingerprint sensing, Kuo believes that Apple will continue down the Face ID path and its TrueDepth camera system as a method for biometric authentication. However, Kuo points out that Android manufacturers are going a different route, particularly down one that culminates in fingerprint sensing technology placed under a display in order to further differentiate themselves from the iPhone. That’s an interesting claim considering most of them try to mimic the iPhone in many ways, including the use of a notch.

All main Android brands currently treat FOD as the important function to differentiate themselves from iPhone (we expect 2H19 iPhone models will not support FOD). The reasons are as follows: (1) The user feedback on the iPhone is lower than expected. (2) The user feedback on the first FOD smartphone, Vivo’s X21 FOD version, is higher than expected, and (3) FOD is the best fingerprint recognition solution for the full-screen design which is necessary for a high-end smartphone.

Kuo has previously claimed that Android makers are years away from making facial recognition technology that can compete with Face ID, and if this is indeed the case, then a move to put fingerprint sensors under displays makes plenty of sense. 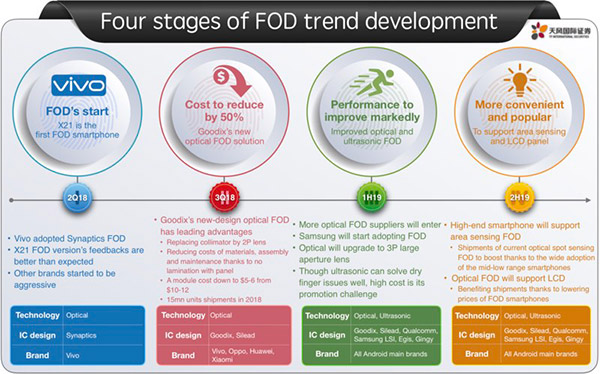