Powerful, versatile, and ultimately affordable home automation-based products are here to stay! Including this highly-rated intelligent power strip which offers versatility in terms of ports and inputs as well as extreme affordability thanks to a deal being offered by Amazon and Koogeek.

It is probably fair to suggest that almost everyone has been in a situation where they need to connect multiple appliances in a single room but they only have limited sockets. This is particularly relevant in home offices or living rooms where a homeowner needs to power their TV, gaming console, smart speakers, cable boxes, and any other technology units which make up their home entertainment system. To combat that, those homeowners could purchase an extension cord, or they could purchase this reduced price Koogeek power strip complete with multiple power options and voice control compatibility.

From an input perspective, the power strip offers three standard socket outlets built directly into the strip. This means that three appliances – such as TV, gaming console, and a set-top streaming box – can be powered-up immediately. It also comes with a total of three built-in USB charging ports which are perfect for smaller devices which are powered via USB, such as hubs or bridges that need to be connected to offer compatibility with other home automation hardware, such as the Hue Bridge offered by Philips. It’s possible to immediately see the value in this type of product. 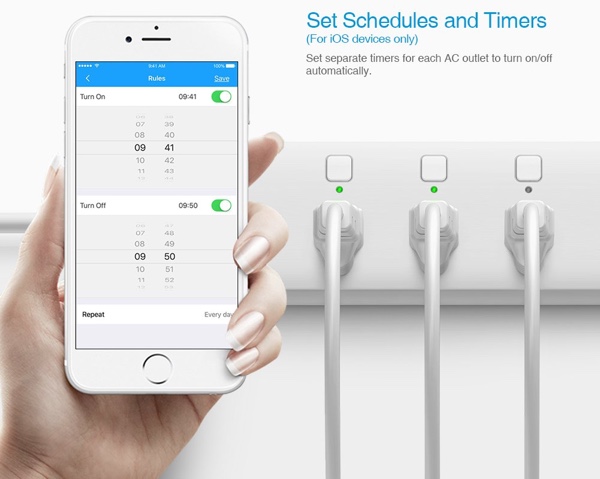 Then, you also need to consider that it also comes with voice assistant compatibility for all three of the main voice platforms that we have in our homes. We are, of course, talking about Siri via HomeKit, Amazon Alexa, and Google Assistant. No additional hardware or hub is required for this as the power strip is WiFi-based and simply connects to an existing 2.4GHz wireless network to derive its intelligence and ability to be controlled via voice or through the dedicated smartphone app. The product is finished off with schedules, timers, and overload protection to ensure the integrity of the device.

Take note of the discount code below which discounts this power strip down to just $44.00 and pick it up right now!