It’s common sense really; if device manufacturers want to improve water resistance and provide an enhanced ingress protection (IP) rating, then the perfect place to start is by minimizing the number of ports on a device.

A new patent application filed with the USPTO suggests Apple could be looking to do exactly this with the removal of the Lightning port in future iPhone models.

Apple’s Lightning port on devices like the iPhone has a dual purpose. Yes, it allows a connection to be made for power purposes and allows the device to be charged. The introduction of Qi-compatibility and wireless charging means that modern iPhones can receive power without being tethered and no longer have a reliance on the Lightning port. The Lightning port also has a data function, allowing the iPhone to be connected to a Mac, PC, or compatible accessory to transfer data seamlessly.

As a company, Apple hasn’t solved that problem yet but looks to be trying to do exactly that with one of its latest patent applications, titled “Conductive Cladding for Waveguides”, and which looks to suggest the design of new technology capable of transferring data to and from an iPhone without the need for a physical port. If this progressed into actual usable technology, then a future iPhone could do-away with the Lightning port altogether and dramatically decrease our reliance on cables as well as improving the overall water and dust resistance of Apple’s smartphone.

Apple’s patent application outlines technology which creates a waveguide (a structure for guiding and passing electromagnetic waves) comprised of a dielectric core that could be “formed of a solid dielectric material that conducts radio waves at millimeter-wave frequencies and above.” The creation of this type of technology could theoretically allow data transfer at much higher rates than what is currently possible with conductive wires, which is what consumers are currently using. 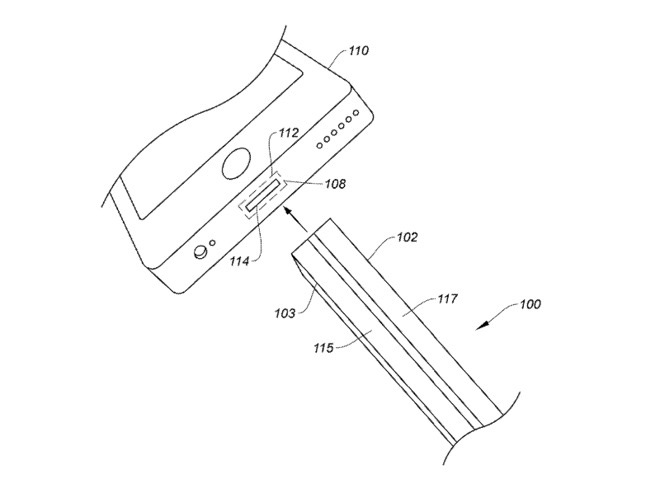 Apple, like many other companies, file patents with the USPTO at an extremely high velocity. The company engineers in research and development departments constantly coming up with new and innovative ideas which get registered with the United States Patent and Trademarks Office. The filing of a patent doesn’t necessarily mean that it will come to fruition, so, as appealing as this sounds, we need to wait patiently and see if Apple progresses the idea.