Here’s Everything You Need To Know About iPad 2 Jailbreak On iOS 4.3.5

It’s been little over a week since Apple scrambled to release iOS 4.3.4 to plug the easily jailbreakable 4.3.3, and already another update has surfaced which addresses "certificate validation" vulnerabilities, and unfortunately, just like iOS 4.3.4, those of you that own an iPad 2 on iOS 4.3.5 can no longer jailbreak, not even tethered like other devices.

Although the PDF exploit made 4.3.3 very simple to jailbreak over at JailbreakMe.com, it also left non-jailbroken users susceptible to exploits of more sinister overtones. Now, two updates later at 4.3.5, it seems now that any pre-iOS 5 untethered jailbreak for those of you on 4.3.4 or 4.3.5 is about as likely as Apple releasing one itself. It wouldn’t be worthwhile for the hackers who have spent in excess of six months searching and testing a fully operational iPad 2 jailbreak, and who now will probably be focusing their efforts on the forthcoming iOS 5, a much improved and updated operating system.

If you have currently jailbroken your iPad 2 on iOS 4.3.3, DO NOT update to 4.3.4, 4.3.5 or any subsequent updates. Apple has now had two opportunities to patch the software so stay exactly where you are. If you have updated, you’re only saving grace is if you have backed up your SHSH blobs on 4.3.3. If so, and you own the WiFi model iPad (doesn’t work on the 3G model, sorry!) then you can downgrade now by following this guide. If you’re unsure if you have, Cydia may have come to your rescue and backed them up for you, (recall selecting a "make my life easier" option?), so it’s definitely worth checking if they have been saved. If they haven’t, then unfortunately you’re going to have to persevere with what you have until the next untethered jailbreak is released. 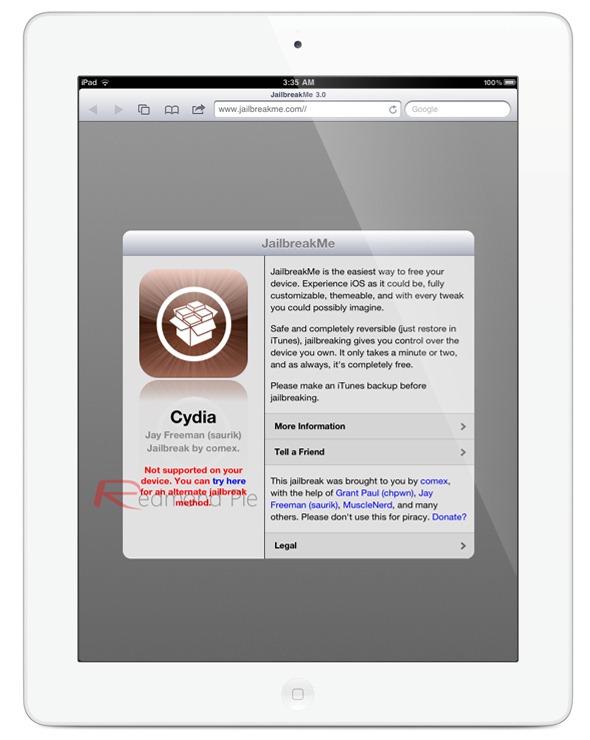 With the clock ticking ever closer to iOS 5, many thought that 4.3.4 would be the final installment of iOS 4 updates. With the jailbreak community well and truly rocked by these last couple of updates, it seems now we can safely assume that we will not be seeing anymore. Although the Cupertino company always has a surprise or two up its sleeve and always likes to keep the jailbreaking community on its toes, so we shall see. One thing is for certain, we can’t wait for a proper notifications system!