Is this the First Sign of Apple Recalling iPhone 4?

Gizmodo has received a report from one of their reader who claims to have got a slightly different iPhone 4 from Apple which doesn’t seem to drop calls, and is free from proximity sensor issue. Full report is as follows.

I’ve been following all of the iPhone 4 stuff since I got mine the day before release. I was able to replicate the signal issue. I also had the proximity sensor issue, causing inadvertent mute button pushing. There were a few other software issues I was experiencing so I consulted Apple at the Fifth Avenue store in New York. They replaced my phone. The diagnostic showed that the OS was corrupt and certain utilities were failing. [They claimed that] all phones with a proximity sensor issue were being sent back to Apple for further study.

Well, when I got the new phone it was different. It was different hardware. The black [plastic] bezel isn’t as black on the new one. I couldn’t see the proximity sensor at all on the previous iPhone 4, now I can. The stainless steel band on the new phone is less ‘steel-y’ and more matte. I’ve also tried to replicate the signal drop and failure. While I can’t say for sure that it is entirely fixed, there is certainly huge improvement. I’m guessing they coated the steel with something, took some black out of the bezel and sent them out without saying too much about it. I also think Apple is willing to warranty a phone for any reason except the signal issue.

The guy next to me said that he had to press the home button several times before the phone would come back from stand-by. This happened once. The Apple tech ran the diagnostic, everything was fine. They still replaced his phone. I think they’re doing a ‘silent recall’. 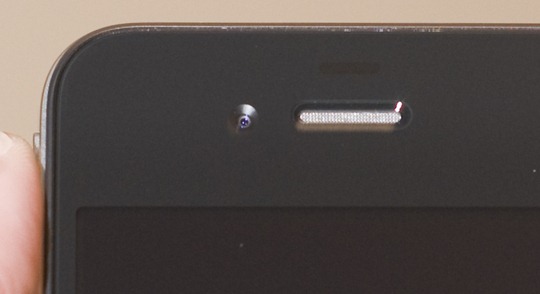 To verify this so called “silent recall”, Gizmodo also sent in a problematic iPhone 4 for exchange but got the same type as the launch model on return, and not as the one mentioned in the report above. If you recently exchanged your iPhone 4 and got a slightly different model as the one mentioned above, then please let us know in the comments section below.