Apple’s iPhone XR is now into its first weekend on sale, and the early indications are that Apple has something of a stealth hit on its hands. It may not have generated the buzz that the iPhone XS and iPhone XS Max did, but at $250 less than the cheapest iPhone XS and with most of the same benefits and features, it’s a bargain compared to Apple’s other offerings.

For that reason, we think that the iPhone XR may be the most important release Apple makes in the smartphone market during 2018, and it’s already proving to be too hot to handle for Android phones

Despite costing $749, the iPhone XR has the same A12 Bionic chip that beats at the heart of the iPhone XS, which means it’s smoking fast. In fact, it’s so fast that in benchmarks it appears to be around 25% faster than Samsung’s finest Android phone.

The phone in question is the Galaxy Note 9, which managed Geekbench 4 multi-core and single-core scores of 8765 and 2442, respectively. That phone starts at $999, $250 more than Apple’s iPhone XR. The Galaxy S9 Plus scores 8661 and 3371 for multi-core and single-core, respectively, with the smaller S9 managing scores of 8518 and 3273. Samsung’s current prices have those costing around $840 and $720, making them more closely related to the iPhone XR in pricing.

However, the iPhone XR outscores all of them with numbers of 10,980 when using multiple cores, and a 4795 score with just a core in use. Not bad, really, and a great example of why Apple gave the phone the A12 Bionic rather than last year’s A11 Bionic. Speed like that can’t be touched, unless you have an iPhone XS or iPhone XS Max with its additional RAM.

Back to the drawing board, Samsung. 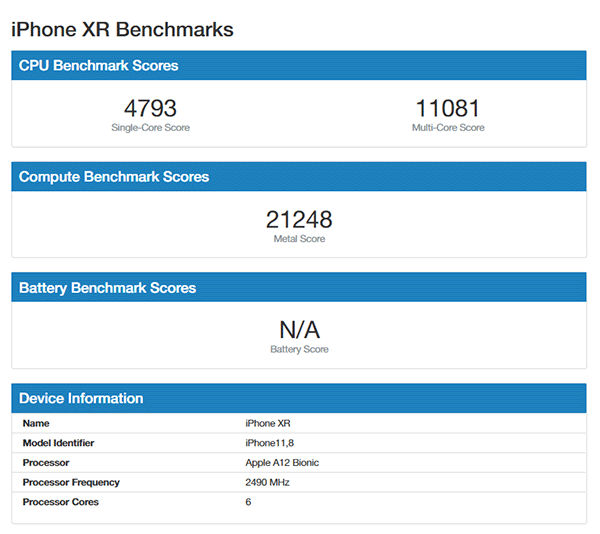