iPhone Accounts For 66% Of Global Smartphone Profits, 32% Of Revenue

According to estimates made by Counterpoint Research, Apple brings in 32% of all smartphone revenue while accounting for 66% of total industry profits. That would mean, according to estimates, that Apple is way out on its own in terms of profits thanks to iPhone.

Samsung currently finds itself in second spot, but it’s a long way behind.

Apple dominates the global handset market by capturing 66% of industry profits and 32% of the overall handset revenue. The loyal premium user base in the major markets like the USA, EU and Japan is one of the reasons that Apple can still operate at a profit level that its competitors can only wish for. Now with a strong service strategy, Apple’s overall ecosystem is strong enough to guarantee it a steady inflow of revenue in the coming years. In the immediate future, we believe that Apple’s profit for the holiday season will increase with the new line up of iPhones gaining good traction.

Samsung is a distant second, taking 17% of the overall handset Industry profits. The increased mix of Galaxy A Series along with the positive start of Galaxy Note 10 Series was the key reason for the growth.

This is all against a backdrop of declining phone sales in general. Counterpoint Research notes that global profits fell 11% year over year in Q3 because people are holding onto their phones for longer. It’s also thought that customers are now choosing to buy mid-range phones rather than the best of the best that also come with inflated asking prices. 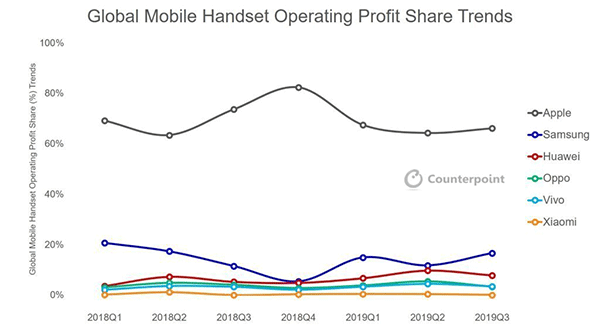