Often accurate analyst, KGI’s Ming-Chi Kuo yesterday weighed in on the iPhone 8 rumors that are circulating right now, with the focus being on the unannounced smartphone’s screen size and resolution. Kuo also posted an illustration that outlines just what the iPhone 8’s screen will be like when compared to existing iPhone displays.

Most notable is the inclusion of a virtual function area, which takes the place of the Home button – something that has been rumored multiple times.

Based on the screen resolutions shared by Kuo, 9to5Mac has also concluded that the iPhone 8 will use 3x Retina scaling just like the iPhone 7 Plus, rather than the 2x scaling used by the iPhone 7.

Going further, we can estimate that Apple will utilize this high-density screen at 3x Retina scaling. Why? The current non-Plus iPhone uses 2x scaling which means app[s] render at 667×375 points.

For the rumored iPhone 8 specs, a 2x scaling would be nonsensical (a 1218×562 res would likely mean UI elements are far too small for comfortable interaction). At 3x, the numbers fit a lot better. 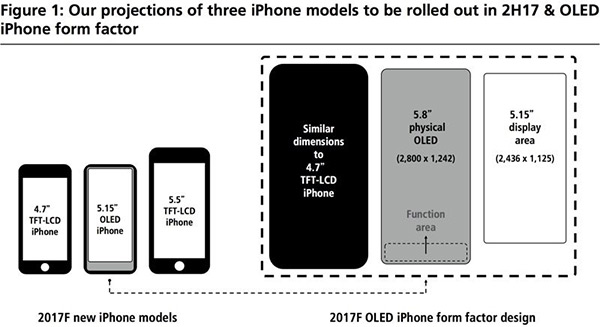 As for the virtual function area, Kuo did not go into detail as to what Apple will use it for, but using the metrics provided, it would appear that the area is roughly the same size as the Dock on the iPhone 7. Will this area perhaps be used in a way similar to the MacBook Pro’s Touch Bar?

We expect more rumors to start to answer that question, and more, in due course.