How To Schedule SMS Text Messages On iPhone [No Jailbreak Required]

Looking to schedule SMS text messages on your iPhone and have them sent automatically? Well, the idea is not entirely a new one, but when it comes to an iPhone, things do tend to become a bit tricky. Jailbroken users have it easy with some of the tweaks available, but for those who don’t have jailbroken devices, having your iPhone automatically send a text at a specified time isn’t as easy to achieve, even with third-party apps because of restrictions in place by Apple. But there is one app that goes around Apple’s restrictions to help schedule and automatically send texts at specified time. Here we are going to look into this app.

The stock Messages app is great and all, but it still doesn’t offer any way to schedule SMS or iMessages even though users have been requesting this feature for a long time now. Apple seems unfazed so far. This is where a third-party app named Delayd comes into play.

The functions of Delayd app are designed with the no-nonsense approach and it pretty much does as it says on the tin. While you will find many apps on the App Store claiming to let you schedule an SMS and automatically have them sent at specified time, they don’t really work as they claim.

If you have tried some of those options, you will have noticed that while those apps do let you schedule texts, they prompt you with a notification for sending the text when it’s time, after which you will need to confirm and send the message manually. Not exactly automatic or is it? This is where Delayd app excels as it offers the ability to automatically deliver your scheduled message without you having to do anything.

Simply set a date and time – which can be adjusted by 15 minutes – hit the Schedule button and forget all about it, your work is done. Once the message is delivered, you will be notified about it. 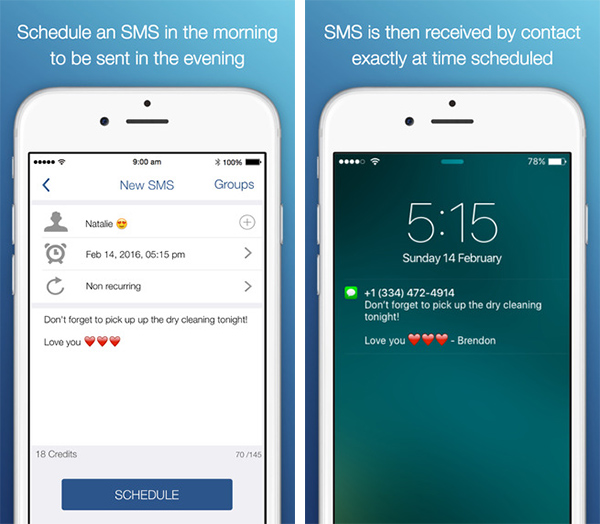 Delayd also lets you schedule messages which can be set to recur on different intervals. The app neatly lays out the Scheduled, Sent, and Recurring on the main screen under their relevant tabs so you have a very clear layout of what’s going on. Moreover, besides SMS text messages, there is also support for scheduling automatic sending of emails, Facebook status updates and even tweets on Twitter! 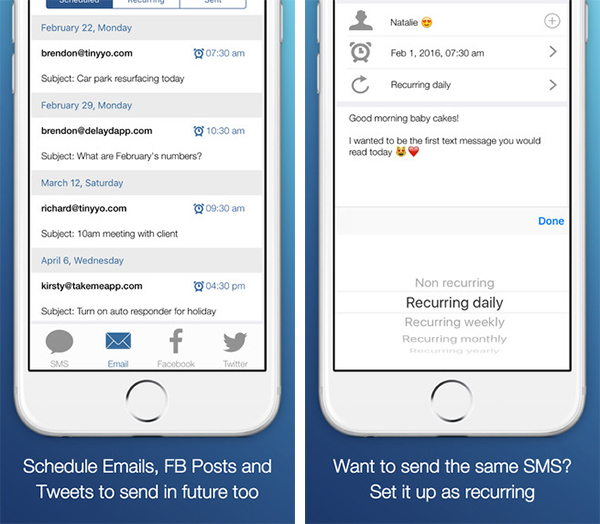 However, as mentioned earlier, due to restrictions in place by Apple, Delayd achieves automatic sending of scheduled SMS through a workaround which involves using its own servers to deliver all your scheduled text messages and emails, as a result of which the recipient cannot directly reply back to that number or email address as he or she cannot see your real number from where the message is sent.

Yes, you can include your number or email ID in the message so that recipient knows where it’s coming from and where to reply to but that’s not exactly ideal. More so, because Delayd uses its own servers, what that unfortunately means is that you will need to pay for credits as in-app purchases to schedule and send texts. 50 credits cost $0.99 and up to 500 credits costs about $3.99. Though the app does include 50 free credits for you to try when you download the app for the first without having to pay anything.

If you are convinced with what it offers and want to continue using the service after your 50 free credits are finished, you can choose to do so via an in-app purchase.

(Download: Delayd for iPhone from the iOS App Store)

Update x1: There’s now another app called Scheduled that lets you do this even better than Delayd. We recommend checking it out here.