Thanks to iPhone 7 and iPhone 7 Plus, Apple has had an extremely impressive fourth quarter of 2016, resulting in the Cupertino-based company overtaking Samsung as the world’s largest smartphone maker.

With 439 million smartphones shipped in total during Q4 2016, Apple accounted for a record-breaking 78.3 million of those units, with Samsung following closely behind with 77.5 million, leaving Apple accounting for a 17.8% market share during the quarter compared to Samsung’s 17.7% share.

Market research firm Strategy Analytics has some extremely pleasing news for smartphone manufacturers, confirming that the industry has grown by approximately 3% annually to reach a total shipment of close to 1.5 billion units during 2016.

Apple’s iPhone accounted for 215 million of those units, with Samsung’s range of devices making up an impressive 310 million. Those impressive numbers put Samsung on top as the overall shipper of devices during 2016, with Apple finishing the year strongly by shipping more units than Samsung in Q4 2016, with both strong iPhone 7 and iPhone 7 Plus sales as well as Note 7 going boom boom playing its part.

Interestingly, Samsung’s year-long performance, which was ultimately lighted by the battery fiasco that befell the Galaxy Note 7 later in the year, resulted in the South Korean company capturing a 20.8% market share, which is the lowest level for the business since 2011. For comparison, during the previous year, Samsung finished with a 22.2% global share of the smartphone market. Apple’s market share has also fallen from 2015 levels, down from 16.1% to 14.5%, with Chinese companies like Huawei, OPPO and Vivo all sitting below 10%. 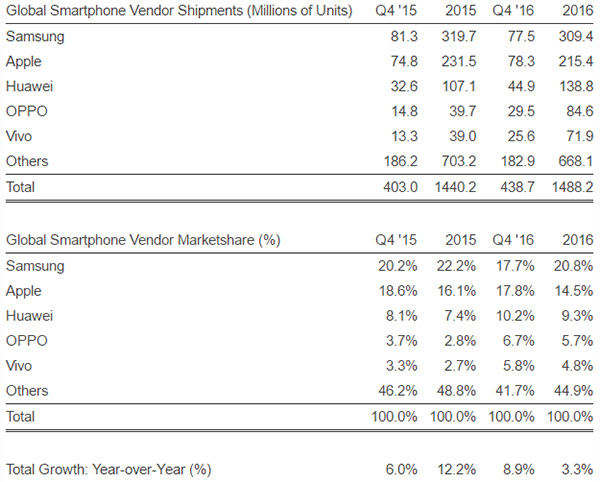 The information makes its way into the public domain almost immediately after Apple held its latest earnings call to announce results of last quarter. Apple CEO Tim Cook has gone on record to state his belief that the smartphone is still in its infancy, predicting big things for iPhone going forward, but also publicly declaring the importance for app developers to keep innovating and building cutting-edge solutions that ultimately add value to the smartphone proposition.

iPhone 7 and iPhone 7 Plus have proven to be extremely popular for Apple, it just remains to be seen if the next-generation is enough of a radical redesign to continue that upward trend.