Once again, we have yet another video that attempts to destroy an innocent smartphone that’s just been introduced to the world. Rather than a drop test to see just how well the hardware has been manufactured, this time around it’s time to take a brand new Samsung Galaxy S7 Edge , and Apple’s current flagship the iPhone 6s Plus, and pit them against one another in a waterproofing test. Of course that means submerging the two phones in water.

Before we actually dive into the video, it’s worth noting that Apple doesn’t officially claim anywhere that the iPhone 6s or iPhone 6s Plus is waterproof. There has been speculation and conjecture suggesting that the iPhone 7 will come equipped with an official waterproof rating, but that remains to be seen. On the other hand, Samsung’s recently announced Galaxy S7 and S7 Edge carry an official IP68 rating, meaning that both phones are classified as dust proof, and protected against complete, continuous submersion in water. 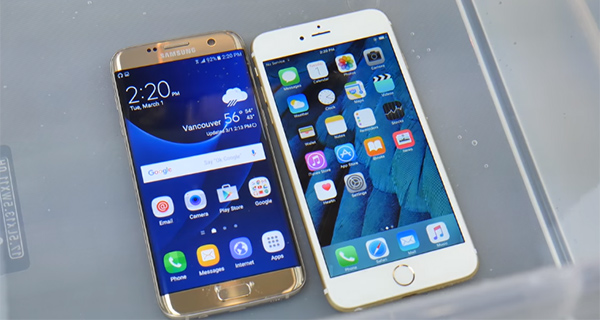 After being entirely submerged in a tub of water for more than three minutes, it’s unbelievable to see that both the iPhone 6s Plus, and the Galaxy S7 Edge are still completely functional and intact. Due to the IP68 rating nature of the Samsung device, you would expect that level of performance in all honesty, but considering Apple doesn’t claim the iPhone 6s and 6s Plus to be waterproof, it’s almost a miracle that the phone doesn’t appear to show any damage whatsoever from the initial three minute submersion. Interestingly, it appears that you can even interact with the Samsung phone underwater, including launching the Camera app and taking photos.

An additional seven minute dunk in the wet stuff once again brings a surprising outcome. The iPhone 6s Plus is still functional, with no water seepage into the display, and still offering a fully functioning and interactive experience. The Samsung Galaxy S7, with its IP68 rating, is of course right alongside the iPhone with no damage whatsoever.

As always, check out the video for yourself and see what you make of it; but there’s a spoiler alert – the iPhone does eventually succumb to the abuse, and starts taking water onboard internally. Still, it’s a stellar performance for a device that doesn’t claim to be waterproof. As for you new Galaxy S7 owners out there, you can feel confident that Samsung has done a great job with the marketed IP68 rating.