AnandTech has a history of taking new chips and doing a deep dive into how they work and what they can offer and it’s done it again with the A13 Bionic in the iPhone 11 and iPhone 11 Pro.

As AnandTech found, Apple really has pushed the envelope this time around. According to the report, the A13 is around 20% quicker than the A12 that was in the iPhone XS and iPhone XS Max last year. That’s good news, but the bad news is that the company had to increase the peak power use of the chip to do it.

In virtually all of the SPECint2006 tests, Apple has gone and increased the peak power draw of the A13 SoC; and so in many cases we’re almost 1W above the A12. Here at peak performance it seems the power increase was greater than the performance increase, and that’s why in almost all workloads the A13 ends up as less efficient than the A12.

Despite that, Apple says the A13 is a chip that’s up to 30% more power efficient than last year’s A12. So far, battery life tests for the new iPhones would suggest that yes, the new chips know how to save power when they need to.

Things really ratchet up when you look at GPU performance, though, with the A13 performing particularly well during sustained performance tests. In fact, it’s around 60% faster than the iPhone XS and its A12 chip. 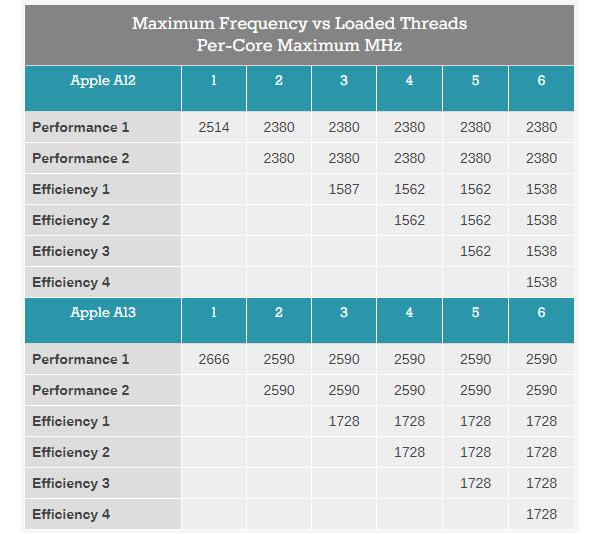 Where the new chip really shines and exceeds Apple’s own marketing claims is in the sustained performance and efficiency of the new GPU. Particularly the ‌iPhone 11 Pro‌ models were able to showcase much improved long-term performance results, all while keeping thermals in check. The short version of it is that Apple has been able to knock it out of the park, delivering performance increases that we hadn’t expected in what’s essentially a mid-generation refresh on the chip manufacturing side of matters.

We’d really suggest reading the full piece for the lowdown on what the A13 is capable of. It’s an overall review of the iPhone 11 and iPhone 11 Pro, but the dive into the chips is particularly interesting.