Individuals who classify themselves as registered developers on the iOS development program will already be well aware that the second beta of iOS 6.1 has been available for past two weeks, but as always, the Apple engineers responsible for the development of iOS have been working hard behind the scenes making changes and improvements to the mobile operating system. The work put in over the last fortnight and the changes and improvements made have now manifested themselves in the form of an iOS 6.1 beta 3 seed to registered developers, available to download from the developers portal.

As is always the case, this latest beta release of iOS is only officially available to those who are fully paid members of the iOS developer program and is intended for developers to get their teeth into and try out any new features or additions that Apple have included. It isn’t exactly clear how much work the engineers have put into iOS 6.1 in the last two weeks, but those who actually download and test the software on their own devices will have their fingers crossed in the hope that Apple have taken the opportunity to eradicate some of the more prominent bugs that have been found in the first two beta releases.

This latest beta of iOS 6.1 is available both as a standalone download for registered members from the iOS Dev Center, or as an over-the-air (OTA) update for those that already have the previous beta 2 installed on their iPhone, iPad or iPod touch. 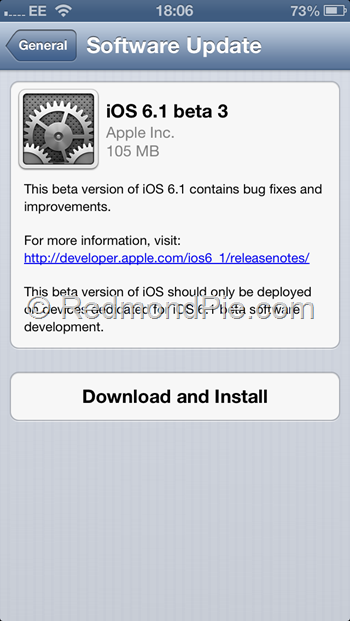 The previous beta release from Apple seemed to be one of extreme secrecy with the main focus of the release being related to opening doors for developers to have better success with integrating Apple’s new Maps into their own apps. It seems clear that by providing additional mapping APIs and making map integration easier for developers, Apple is hoping to enticing developers into integrating maps into their apps on the store, in the hope of boosting the popularity of the system. If you happen to be part of the $99 iOS development program, then head on over to the developer portal to download the beta and test out the improvements.