iOS 13 Can Use Siri To Silence Unknown And Spam Callers

With iOS 13 beta 1 now in the hands of developers, we’re really starting to learn about some of the new additions that will be part of the release when it ships to the public later this year. One of those features promises to help users deal with spam calls with the assistance of our old friend, Siri.

Users with iOS 13 installed will be able to automatically send spam and unknown calls to voicemail, with Siri handling the load.

The feature is outlined on Apple’s iOS 13 preview webpage.

A new setting protects users from unknown and spam callers. When the setting is turned on, iOS uses Siri intelligence to allow calls to ring your phone from numbers in Contacts, Mail, and Messages. All other calls are automatically sent to voicemail.

There are already multiple anti-spam call blockers available for the iPhone, although they are all third-party solutions found in the App Store. We’ve yet to come across one that is able to live up to their lofty claims, however, and the hope is that Apple is able to get this right where others have failed. 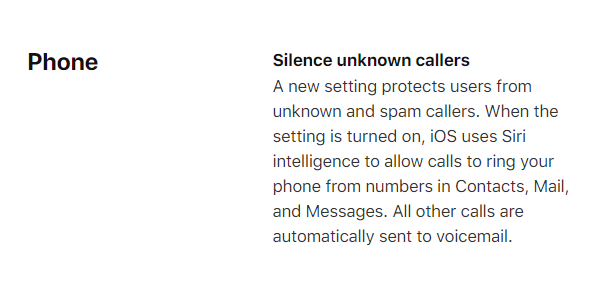 Apple is currently testing this feature, among others, as part of iOS 13 beta 1 that is in the hands of developers right now. A public beta release is expected next month, with a full public release of iOS 13 penciled in for later this year. If previous years are anything to go by, a launch in the second or third week of September seems likely.