It has certainly been an interesting week as far as jailbreaking and the jailbreak community goes. We know there is progress being made on Electra for iOS 11.3.1. And we know that Houdini semi-jailbreak for iOS 11.3.1 is out in the public domain. However, now, it has become clear that Houdini is also working reliably on devices running Apple’as initial iOS 12 beta.

Abraham Masri – the developer of the Houdini semi-jailbreak – pushed out the update to Houdini into the public domain approximately 36 hours ago.

That release has been received well by the community and has been used as yet more proof that “jailbreaking isn’t dead” and that there is still a very valid and active game of cat and mouse going between the jailbreak community and Apple Inc. However, this latest revelation will only serve to raise even more excitement levels now that it’s clear that iOS 12 is also vulnerable, in one form or another.

The revelation has come to light thanks to an image shared by Masri which shows Houdini running on an iPhone with iOS 12 installed. And, judging by a secondary post, which reads “Just to be clear, the exploit used in the screenshot is not very powerful. It allows Houdini to write anything outside the sandbox but not read,” it seems that a new exploit is being used to give this version of Houdini working on iOS 12.

As per the post, it may not be very “powerful,” but it’s great to see that work has already started on trying to liberate Apple’s iOS 12 platform, even before we have received the second pre-release seed of the firmware. 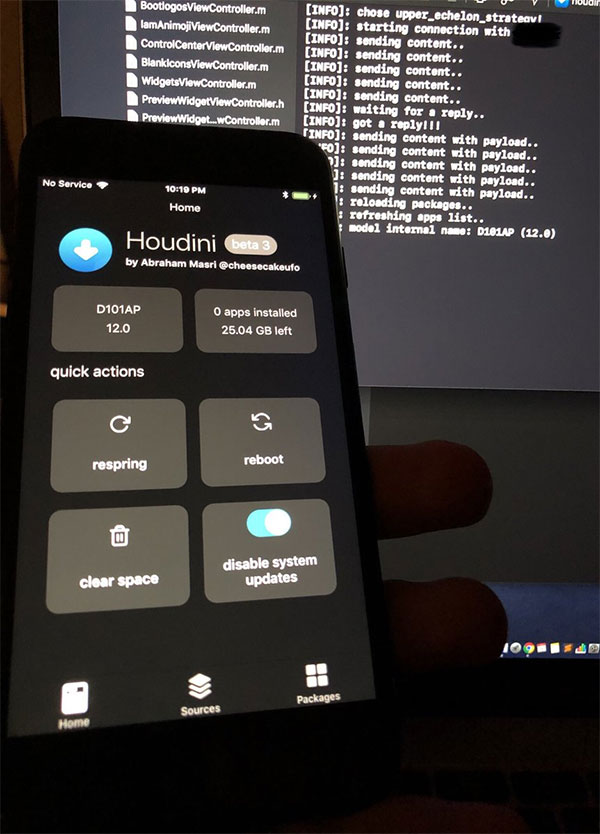 As a company, Apple will continue to push out new versions of iOS 12 into the testing community and will attempt to make those versions as secure as possible. In the meantime, it’s abundantly clear that developers and security researchers will be attempting to beat Apple at its own game and get a jailbreak ready for when iOS 12 officially goes live.

It’s unlikely that we will see anything released in an official capacity while the platform is still in beta but let’s hope that something can be put in place for when iOS 12 goes live later this year.