We know you have been chomping at the bit for an update on the current playing field as far as an iOS 11.3.1 jailbreak is concerned. So, without further ado, here it is, containing everything that we currently know.

Let’s get the really good news out of the way in the first instance. We already know from news in the community – including the confirmed public release of the latest Ian Beer exploit – as well as from CoolStar, that Electra for iOS 11.3.1 is going to happen.

Not only do all of the necessary components exist to update Electra and release something to the public, but CoolStar himself has already previously confirmed that he is going to be updating Electra. His latest posts also reiterate the fact that it’s a work-in-progress.

Now, to the recent activity, CoolStar has now confirmed that all of the relevant pieces for the jailbreak have been collected together and that it was time for the work to begin on putting them in the right place and ensuring that Electra could effectively deliver the payload to all supported devices and firmware versions.

It is, however, important to note that in the first instance CoolStar is going to be working on creating a developer-facing jailbreak for those who have a paid Apple Developer account. It’s unlikely that this version will ever make it into the hands of the public. 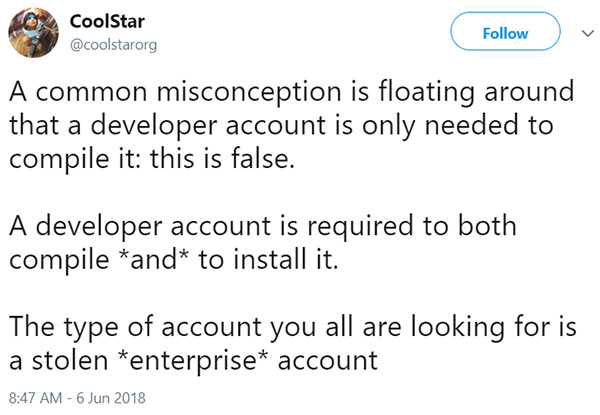 Rather than have an influx of individuals who all run out and pay Apple $99 for a paid developer account, CoolStar has also advised that people simply do not do this and wait for additional updates on an actual pubic-facing release.

This one will likely not be released, but it will give us a good head start for the public 11.3.1 jailbreak

That being said, I do not recommend going out and buying developer accounts just yet.

Stand by. Updates will be posted when ready and appropriate.

There have been no timescales provided for this release. As you can imagine, having the necessary components for a jailbreak is only really half of the battle. Tying all of those components together, overcoming the rest of the technical hurdles, and creating something which is reliable, stable, and which can be released into the community to support all compatible firmware versions and devices is a huge chunk of work.

As always, we will keep you informed as and when anything additional happens or when any progress is made. In the meantime, if you haven’t already, we highly recommend you get your device prepared on iOS 11.3.1 while Apple is still signing that old firmware. You can find our guide on it here.