If you’re using one of the beta releases of iOS 12 on an iPhone or an iPad, then the chances are you have already hit an annoying bug that first started on August 27th when the most recent beta version was released but has become much, much more irritating over the last 24 hours.

The bug of which we speak related to a popup that just keeps on popping up, proclaiming that there is a new iOS 12 update available and that users need to update to it. The problem is, there isn’t a new update at all.

While the update, which reads “A new iOS update is now available. Please update from the iOS 12 beta” could be seen as irritating, what is making things much worse is that the popup appears after every device unlock and even when users simply invoke and then dismiss Notification Center.

To compound matters, the message has to be manually dismissed before the device can be used, meaning anyone unlocking their device a lot will become all too accustomed to tapping “Close” on a message that essentially means nothing at all.

According to developer Guilherme Rambo, the issue appears to stem from an error in the most recent update that causes iOS to believe that the beta’s expiration date is around the corner, causing the popup to appear. 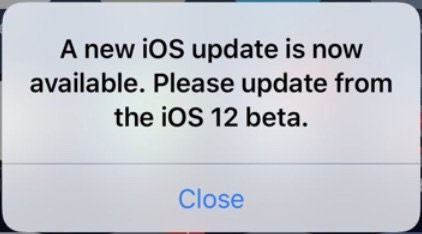 This would also suggest that the issue needs to be fixed via another iOS 12 beta, so expect that to be landing any time soon. Hopefully very soon indeed!

Meanwhile though, there is a temporary work around to rid the device of this issue for every time you unlock it. This would be heading over to Settings > General > Date & Time, disabling Set Automatically and setting a date earlier than the 26th of August. Of course this will affect some aspects of the iOS environment including apps, but till the fix arrives, you know what to do.