Apple is happily pushing out the smaller minor point updates for iOS 11, with the latest release to the public sitting on version 11.0.3. At the same time, ticking along in the background, the Cupertino-based company also has iOS 11.1 out in a pre-release state with developers and public testers. Currently, in beta 2, the world is waiting for iOS 11.1 beta 3 to drop, but when exactly will that be? 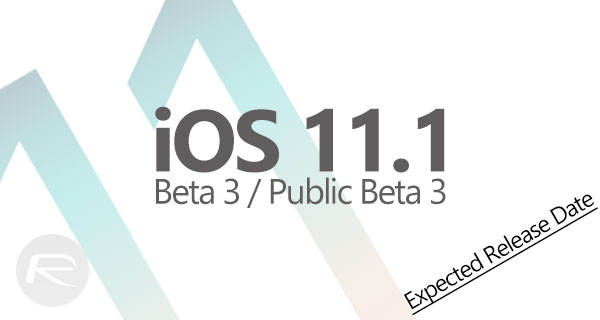 Apple is entering into an interesting and pivotal part of the year. Not only is the company testing a relatively big version of iOS 11 with developers and testers, but it’s also gearing itself up for its biggest product launch in the last decade, iPhone X. The tenth anniversary iPhone – which comes with a totally new design and edge-to-edge OLED display – is set to start shipping on November 3 with iOS 11.1 pre-installed. That means that Apple really needs to get iOS 11.1 complete and in the hands of the public sooner rather than later.

With the release of iPhone X in mind, and taking into consideration Apple’s previous release patterns and timescales where iOS 11.1 is concerned, we would expect the company to issue iOS 11.1 beta 3 to developers and public beta testers on this coming Monday, October 16.

That would mean that all of those who are currently involved in the testing of iOS 11.1 would get a notification on their device advising that beta 3 is available as an over-the-air update. Those who aren’t currently testing, but who would like to, would also be able to get involved from that point onwards.

It’s currently too difficult to predict exactly how many iOS 11.1 seeds Apple will release into the public domain before taking that particular version of iOS 11 live globally. However, with the release of iPhone X looming, and the fact that we expect that device to ship with iOS 11.1 pre-installed, it’s fairly logical to deduce that we could only potentially see a beta 4 or beta 5 at a stretch before it’s put live. If we expect anything to change or receive any insider information that the next version is going to be delayed, then we will, of course, let you know instantly.