Yes you read that right! The Italian site iDroid has managed to port the latest Android 2.2 OS (aka Froyo) to iPhone 3G. This port is based on the same iBoot method which was originally released for both iPhone 2G and 3G with Android 1.6. 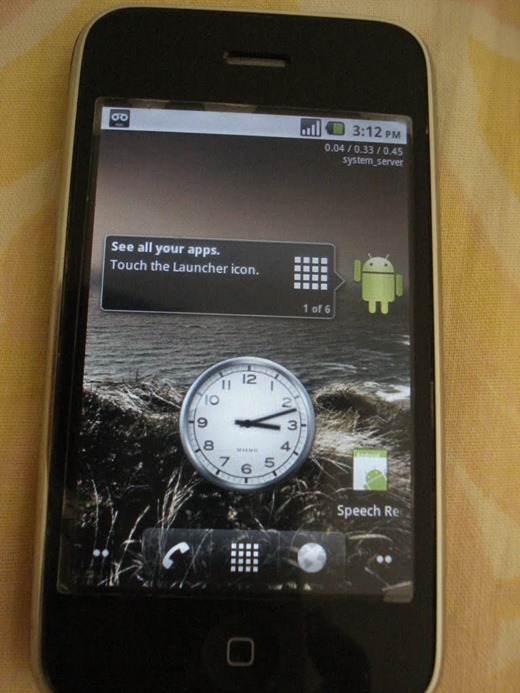 Apart from WiFi and sound, almost everything else is said to be working, including sending of calls and SMS text messages. If you are brave and want some adventure, follow the Italian-to-English translated instructions below to get Android 2.2 working on your iPhone 3G. We might have our own version of the guide up if we get this working. And hopefully, the developer behind iPhoDroid will bring support for Android 2.2 so that we can install it on our jailbroken iPhones within minutes.

To transfer files to your iPhone:

1) Download this file, unzip it and place it on your desktop;
2) Put your iPod in recovery mode: turn off the device and connect to the computer while holding down the Home button until iTunes recognizes the device;
3) Open Terminal and type the following commands in sequence:
cd Desktop
CD Installer
sudo. / loadibec openiboot.img3
4) compare three symbols on the iPod. Move to the second with the power button, and press the Home button on the top of the bottle. Done what the iPod will appear a series of writings. When display ‘Welcome to OpeniBoot’ the process is finished.
5) From the terminal type this command:. / Oibc
6) Put the device in recovery mode but this time hold down Home and Power until you see the classic iTunes logo with the cable on the iPod screen. Close iTunes on your Mac and move to the terminal;
7) From terminal, press Ctrl and C together;
8) Replace the Openiboot typing sudo. / Loadibec openiboot.img3 appear again and the three symbols. This time, however posizioniamoci always on the top of the bottle but DO NOT hit the Home button;
9) On the terminal, while remaining in the Installer folder, type. / Oibc and do not press Enter;
10) Last step: now we sull’OpeniBoot and click on Home on the bottle, but we will soon appear on the iPod first written we press Enter on Terminal with the command. / Oibc;
Now displays that appear on the iPod also written on the terminal. Finished loading and joints on ‘Welcome to OpeniBoot’, type install from terminal and see other writing appear.
After missing the written terminal we type in reboot and will always correctly completed the installation.
Turn on your iPod go to the Android robot, press Home, and enjoy your Android device!

and here is the video of it in action!